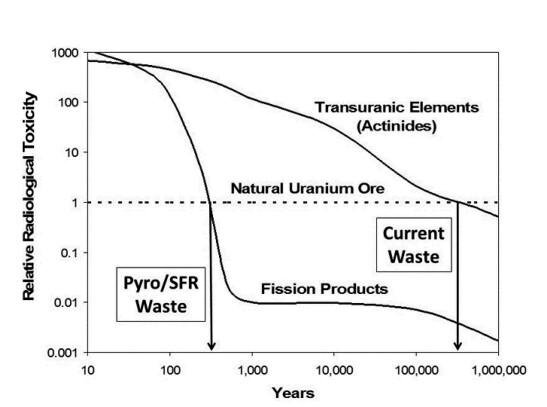 About 5% of the uranium in a light water reactor fuel rod is used to generate power before the rods are removed from the reactor and placed in permanent storage, leaving spent nuclear waste ( SNF) continue to decay at a relatively high rate of toxicity for hundreds of thousands of years.

SNF’s recycling work – just under a third of the nearly 400,000 tons produced worldwide has been reprocessed – has yielded mixed results, producing potentially dangerous weapons-grade materials and at a cost well above the average. mining more uranium.

Current global reprocessing capacity is approximately just under 2,000 tonnes per year through plants in France, Britain, India and Russia.

Following the Russian invasion of Ukraine, securing the domestic supply of fuel for American nuclear reactors has become a priority and a research axis seems particularly promising for the new generation nuclear reactors currently under development.

Scientists at the US Argonne National Laboratory began working on fast reactor fuel recycling in the early 1960s during the development of the Experimental Breeder Reactor-II (EBR-II) and later during the Integral Fast Reactor program ( IFR).

Argonne extended work begun with the EBR-II, a fast neutron reactor, to develop pyrochemical processes for the recycling of oxides, carbides and other advanced fuels.

The IFR, a fast reactor cooled by liquid metal, was then designed to produce energy and consume waste. While working on it, the researchers adopted a pyroprocess in which an electrochemical reaction is used to separate the desired actinides from unwanted fission products for recycling into new fuel. .

“At this time, our goal is to bring pyroprocessing to a ready-to-deploy state,” says Krista Hawthorne, Argonne Pyroprocess Engineering Section Manager.

Pyroprocessing takes the hard ceramic oxide pellets recovered from light water reactors – about 95% of which is still uranium and 1% is long-lived radioactive element actinides while the rest is of unusable fission products – and converts the oxide constituents into metal.

This metal is then immersed in a vat of molten salt where, through electrorefining, an electric current selectively dissolves and redeposits uranium and other reusable elements which are then used to make fuel suitable for use by fast reactors.

The 4% of the fuel that is unusable fission products still needs to be disposed of via permanent storage, although its radioactive toxicity returns to natural uranium levels within a few hundred years, considerably less than the thousands of years it takes untreated SNF. come back because most of the long-lived isotopes have been recycled.

Today, LWRs remain the standard nuclear reactor design in the United States, for which raw uranium is a cheap and readily available fuel, but as fast reactors get closer to demonstrations and, by the time end of the decade, commercial adoption, recycled fuel could be the norm.

Through extensive work on the economics of fuel recycling, Argonne’s 2018 study, “Conceptual Design of a Pilot-Scale Pyroprocessing Facility,” highlights the viability of electrorefining as a practical solution to managing and the recycling of spent fuel for fast reactors.

In the research, a system designed to recycle 100 tons of fuel per year had a total capital cost of $398 million, including process equipment and support systems, estimated at $93 million, and the cost of the $305 million facility.

The move to 400 tons per year was estimated at a total capital cost of $911 million and an annual operating cost of $90 million.

Since the publication of the study, Argonne has improved this design to bring it to a commercially viable level using the latest technologies.

“We are doing things like integrating some of the next generation sensors that we have developed with process control to improve efficiency. and we’re also using techniques like machine learning,” explains Hawthorne.

Argonne is developing a digital twin of the electrorefiner that takes information from in-house developed monitoring sensors so the team is able to identify and respond to changing electrorefining conditions in real time.

“We are working in this direction to improve efficiency and work on the industrialization of pyroprocessing,” she says.

Argonne’s work, alongside microreactor developer Oklo, has caught the attention of the US Department of Energy (DOE).

In August, US Energy Secretary Jennifer Granholm was given a tour of the company’s experimental programs at Argonne by Oklo founders, CEO Jacob DeWitte and COO Caroline Cochran alongside the director of the Argonne Paul Kearns laboratory.

The company, which holds a DOE site-use license to build its first plant at the Idaho National Laboratory (INL) and developed the first combined advanced fission license application, says it is on the right track. way to deploy its first commercial advanced reactor in the United States. by 2025.

Next-generation fast reactors, such as the Aurora in Oklo, are supported by the recycling of spent fuel and thus offer a much-needed solution for closing the nuclear fuel cycle.

“Right now waste is a huge burden and there is massive expense just to store it, so if someone were to pay us to get rid of it, it would change the economy. is free, it is always beneficial and economical.” says COO Cochran.

Current concern over the cost of recycling is unfounded, Cochran says, especially when powering next-generation fast reactors such as Oklo’s Aurora, TerraPower’s Natrium or Moltex and Elysium’s molten salt reactors. .

“There’s no real fundamental reason why it should be so expensive. It’s how you operate it and regulate it. Fuel is our biggest cost. If we can recycle it, then we can really achieve lower costs than anything on the network today,” she says.

This document is subject to copyright. Except for fair use for purposes of private study or research, no part may be reproduced without written permission. The content is provided for information only.

A Canadian company will open a rare earth mine in Greenland