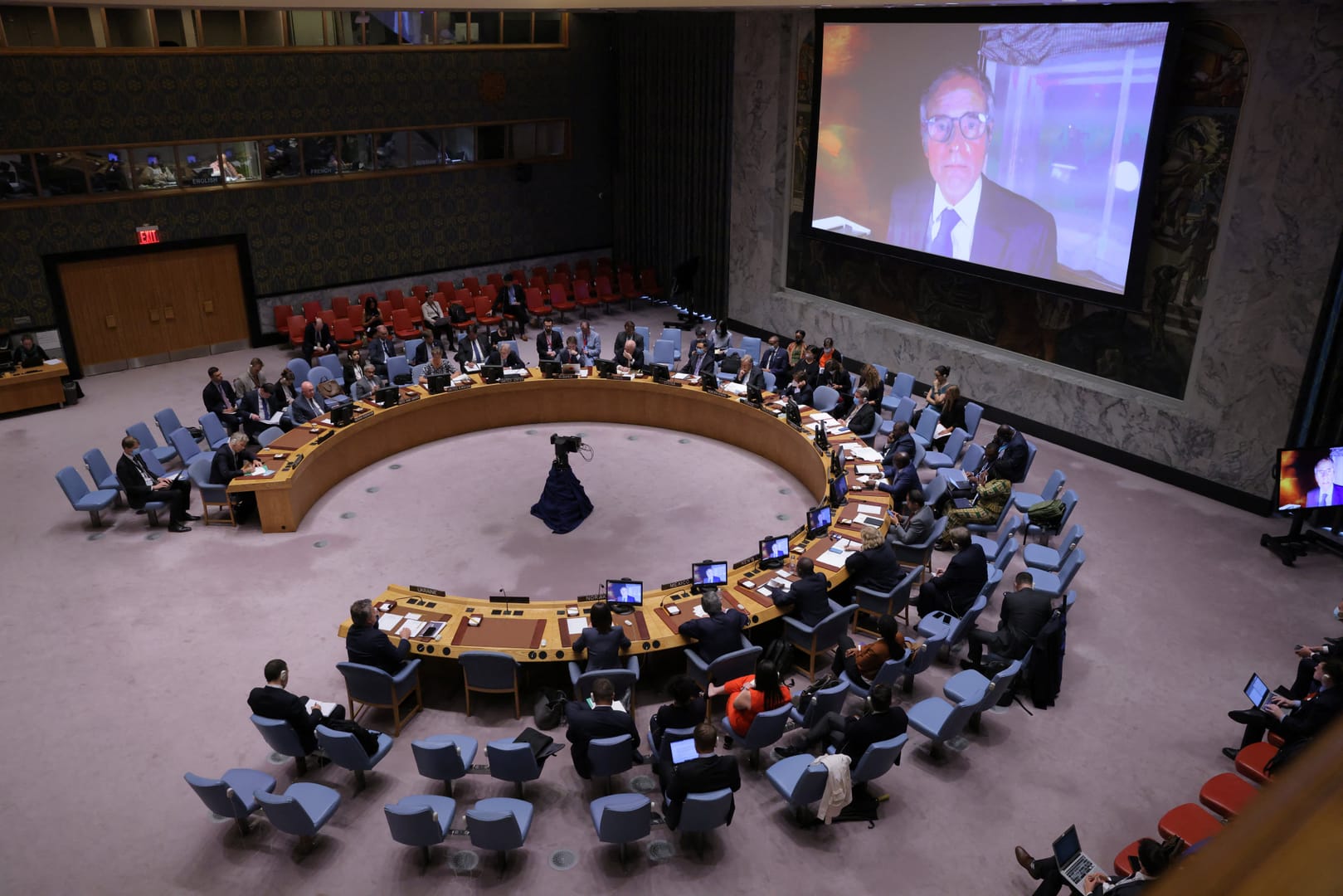 WASHINGTON, DC — Four weeks of debate — at a review conference on a treaty widely seen as the cornerstone of nuclear disarmament — has yielded no consensus on how to move forward despite the efforts of the Holy See, disarmament advocates and non-nuclear nations.

Russia blocked agreement on an outcome document at the end of August 26, the final day of the review conference, by opposing paragraphs raising concerns about military activity around Ukraine’s Zaporizhzhia nuclear power plant.

The 10th Review Conference of the Treaty on the Non-Proliferation of Nuclear Weapons (NPT) at the United Nations Headquarters in New York achieved broad consensus on many issues related to nuclear safety, but could not satisfy the objection of the Russian delegation even though the document did not mention Russia by name.

Maryann Cusimano Love, associate professor of international politics at the Catholic University of America, attended the conference as an expert consultant to the Holy See Mission to the UN

She said Catholic Press Service that the participation of the Holy See in the review conference and its constant voice in urging the world to abolish nuclear weapons was essential, especially at a time when fears remain about the introduction of nuclear weapons into war in Ukraine.

At the start of the war, Russian President Vladimir Putin put his country’s nuclear forces on high alert, but has since backed down from any suggestion that he would authorize the use of nuclear weapons in Ukraine.

The review conference brought together delegations from around the world in New York to discuss next steps toward achieving the treaty’s goal of eventual abolition of nuclear weapons. Originally scheduled for 2020, it was delayed three times due to the coronavirus pandemic.

Among the provisions of the treaty is a requirement that parties thereto “shall pursue negotiations in good faith on effective measures relating to cessation of the nuclear arms race at an early date and to nuclear disarmament.”

Disarmament advocates say not enough has been done to achieve this goal.

Delays in convening the review conference have not deterred disarmament advocates, who have been working behind the scenes for more substantial action to limit the spread of nuclear weapons and complete nuclear disarmament by the five nations that originally signed the treaty in 1968: China, France, the Soviet Union, with rights since assumed by Russia, the United Kingdom and the United States.

However, their efforts were thwarted when Argentine Ambassador Gustavo Zlauvinen, Chairman of the Review Conference, announced late August 26 that no consensus had been reached.

Cusimano Love said that the constant message of the Holy See to call for the abolition of nuclear weapons and the peaceful use of nuclear energy stems from its conviction that human life and dignity must be protected, in particular in a politically polarized world.

“It’s a key voice to raise the moral questions and to be able to try to cross these very highly politicized lines,” she said of the work of the Holy See.

She also said that while the Russian objection was the main focus of the meeting, the 35-page draft document proposed many other measures related to nuclear security, reducing nuclear arsenals and protecting human life. that conference delegates can pursue in the future.

Bishop David J. Malloy of Rockford, Illinois, chairman of the U.S. Bishops Committee on International Justice and Peace, was among those who lamented the failure of delegates to reach a consensus statement after nearly a month. of negotiations.

In a September 8 statement, he called for “accelerating and strengthening the implementation of the NPT and called on all states parties to re-engage in dialogue and demonstrate progress towards the elimination of nuclear weapons everywhere.” .

After Zlauvinen’s announcement, the 65 states that signed the 2017 treaty to ban nuclear weapons, including the Holy See, released a statement expressing their disappointment with the outcome. They pledged their support for the treaty, saying it was a necessary step towards an eventual ban on nuclear weapons.

The ban treaty entered into force in January 2021, but did not win the support of any nuclear-weapon country.

Supporters of the ban treaty have also expressed concern that the risk of the use of nuclear weapons in today’s world remains high, “and the possibility of catastrophic humanitarian impact… profile in a worrying way for us”.

“We are appalled that this very fact was used during the deliberations of the NPT Review Conference as an argument against the urgently needed progress in nuclear disarmament and to defend an approach to security based on the fallacy of nuclear deterrence. . This approach is based on the threat of the actual use of nuclear weapons and, therefore, the risks of destroying countless lives, societies, nations and inflicting catastrophic global consequences,” the statement said.

“We are adamant that the existence of nuclear weapons and nuclear deterrence doctrines diminishes and threatens the security of all states; indeed, they threaten our very survival,” he added.

Elsewhere, the executive committee of the Conference of European Justice and Peace Commissions in Brussels was among organizations linked to the Catholic Church that were concerned that the review conference ended without a consensus document.

Committee members, in an August 31 statement, observed that “the world appears to have regressed into a new Cold War dynamic” because of Russia’s war with Ukraine.

“The erosion of respect for the principles of international law, including arms control agreements, is undermining trust within the international community. Along with renewed strategic rivalry between nuclear powers and evolving technologies, this makes the scenario of an international or accidental nuclear explosion very real,” the statement read.

Diehard proponents of nuclear disarmament have criticized the lack of consensus, saying it is the status quo orchestrated by nations that possess nuclear weapons, including the United States and Russia.

“It was very disappointing, but honestly not very surprising,” said Mary Yelenick, chief representative of Pax Christi International at the UN. CNS.

She said the US and other nations are ‘using Russia’s invasion of Ukraine as an excuse to say what they want to say’, adding that concerns about ‘the specter of nuclear conflagration’ are being ignored .

In response, non-nuclear nations and non-governmental organizations advocating disarmament will place greater emphasis on building support for the ban treaty in order to pressure the world’s nuclear powers to dismantle their highly destructive arsenals.

Nick Mele, a nuclear disarmament consultant with Pax Christi USA, echoed Yelenick, saying the “posture” of nuclear-armed nations in the months leading up to the conference was to maintain the status quo.

“What we saw was, in a sense, kind of proof that nuclear-weapon states are not interested in disarmament as a group,” said Mele, who previously worked for the agency. American information in East Asia and Africa.

The two disarmament advocates from Pax Christi called for grassroots organizing and education to build momentum for the implementation of the ban treaty.

The next NPT Review Conference is scheduled for 2026 and preparations will begin next year. Cusimano Love said the short turnaround means the momentum to achieve the NPT’s goal of reducing, and ultimately eliminating, the world’s nuclear arsenals will build.

Cusimano Love explained that a meeting in Vienna in June of states that signed the ban treaty drew up a 50-point action plan with a timetable that can point towards the eventual elimination of nuclear weapons. Such a step – with specific goals and a timetable – was being discussed by delegations disappointed by the results of this year’s Nonproliferation Treaty Review Conference, she said.

The Conservatives have spent a decade prioritizing fossil fuel profits. Now we are all paying the price | Max Wakefield