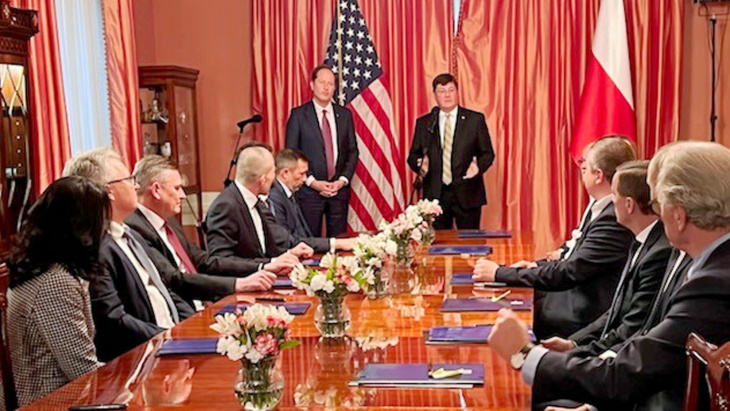 Bechtel cooperates with Polish companies for a new construction: Corporate

Bechtel has signed memorandums of understanding with 12 Polish companies for the potential development of two new nuclear power plants in Poland. The US engineering firm said further deals would follow in the future.

Bechtel’s John Howanitz (center) and Mark Brzezinski, US Ambassador to Poland, speak to representatives of 12 Polish companies that have signed memorandums of understanding with Bechtel for the potential development of two new nuclear power plants (Image : Bechtel)

The MoUs – signed in a ceremony at the US Ambassador’s residence in Warsaw – are with some of Poland’s largest heavy construction and engineering companies. They include: electrical equipment manufacturers BAKS, Hitachi Energy Poland and Zarmen; general contractors Budimex, Doraco, Mostostal Warzsawa and Polimex Mostostal; engineering companies Energoprojekt – Katowice SA, ILF and KB Pomorze; the manufacturer of cranes, lifting and handling equipment Protea Group; and the steel manufacturer Vistal Gdynia SA.

“Building these plants would require Polish expertise and thousands of skilled Polish workers,” said Ahmet Tokpinar, general manager of Bechtel’s Nuclear Power business. “As an EPC partner for these projects, Bechtel intends to join a large number of Polish companies as key members of our outsourcing team. Now is the time to identify these future partners in the supply chain.”

“This marks another important step in a project that will bring our countries even closer over a 100-year partnership,” added US Ambassador to Poland Mark Brzezinski. “The U.S. Embassy in Poland is pleased to support Bechtel and Westinghouse in selecting local Polish suppliers for this strategic project.”

In July last year, Westinghouse Electric Company announced the start of preliminary engineering and design (FEED) work under a grant from the United States Trade and Development Agency “to advance” the nuclear energy program in Poland. Westinghouse said the FEED was one of the key elements in the implementation of the intergovernmental agreement between Poland and the United States regarding cooperation to develop a civilian nuclear energy program.

Westinghouse is running the FEED – which will be based on AP1000 technology – in conjunction with Bechtel. The FEED study will be reviewed later this year by the Polish government to help it select the best partner for the nuclear power plant program.

The diplomatic notes that Poland and the United States exchanged in 2020 on cooperation in the development of Poland’s civilian nuclear energy program officially took effect in March 2021. This means that the United States has 18 months from that date to prepare both a technology and a financing offer to build nuclear power plants in Poland.

Poland Energy policy for 2040 rests on three pillars: a just transition; a zero-emission energy system; and good air quality. The first nuclear unit of 1 to 1.6 GWe is due to be commissioned in 2033, and five more units, or 6 to 9 GWe, will follow by 2040. The coastal towns of Lubiatowo and Kopalino in the municipality of Choczewo in Poland were named as the preferred location for the country’s first major nuclear power plant.

Poland has already received an offer from Korea Hydro & Nuclear Power for the construction of six APR-1400 reactors and an offer from EDF for up to six EPR units. Westinghouse has until September this year to submit its offer.