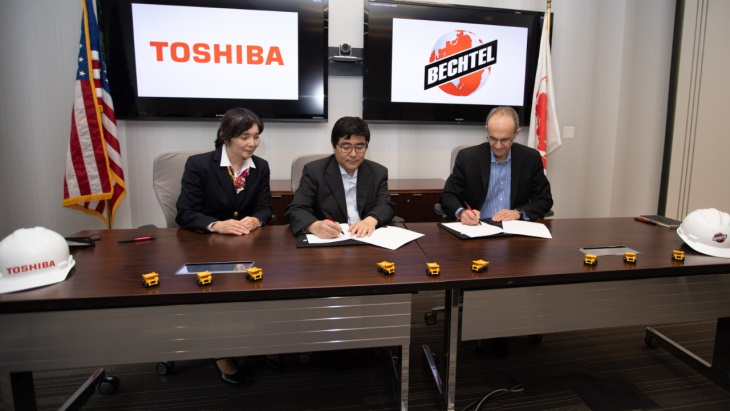 The American engineering and construction company Bechtel has signed a memorandum of understanding with two subsidiaries of Japan’s Toshiba to collaborate on the delivery of steam turbines and generators for Poland’s first nuclear power plant.

Under the agreement, Bechtel, Toshiba Energy Systems & Solutions (TESS) and Toshiba America Energy Systems (TAES) will collaborate to supply steam turbines and generators for the project. In the future, the three companies will carry out concrete studies on the supply of equipment.

Toshiba is the latest company to join the group of American and Polish companies organizing a team led by Bechtel and Westinghouse.

In July last year, Westinghouse Electric Company announced the start of preliminary engineering and design (FEED) work under a grant from the United States Trade and Development Agency “to advance” the nuclear energy program in Poland. Westinghouse said the FEED was one of the key elements in the implementation of the intergovernmental agreement between Poland and the United States regarding cooperation to develop a civilian nuclear energy program.

Westinghouse is running the FEED – which will be based on AP1000 technology – in conjunction with Bechtel. The FEED study will be reviewed later this year by the Polish government to help it select the best partner for the nuclear power plant program.

The diplomatic notes that Poland and the United States exchanged in 2020 on cooperation in the development of Poland’s civilian nuclear energy program officially took effect in March 2021. This means that the United States has 18 months from that date to prepare both a technology and a financing offer to build nuclear power plants in Poland.

Bechtel announced in April that it had signed memorandums of understanding with 12 Polish companies for the potential development of two new nuclear power plants in Poland.

“Any new nuclear power plant requires the expertise of proven companies with the required certifications,” said Bechtel’s Ahmet Tokpinar. “Toshiba has been supplying steam turbines, generators and services to power plants of all types for nearly 100 years. This is a team with proven manufacturing capabilities and a history of excellent service.”

“We are honored to partner with Bechtel as this exciting opportunity grows to support Poland’s new nuclear power plant lawsuits,” said Kentaro Takagi of TAES.

Yuki Arima of TESS added, “As the demand for low-carbon and stable power sources increases, Toshiba is working closely with our customers and partners to successfully deliver safe and reliable nuclear power solutions that have a positive impact around the world.

The biggest reshuffling of oil flows since the 1970s