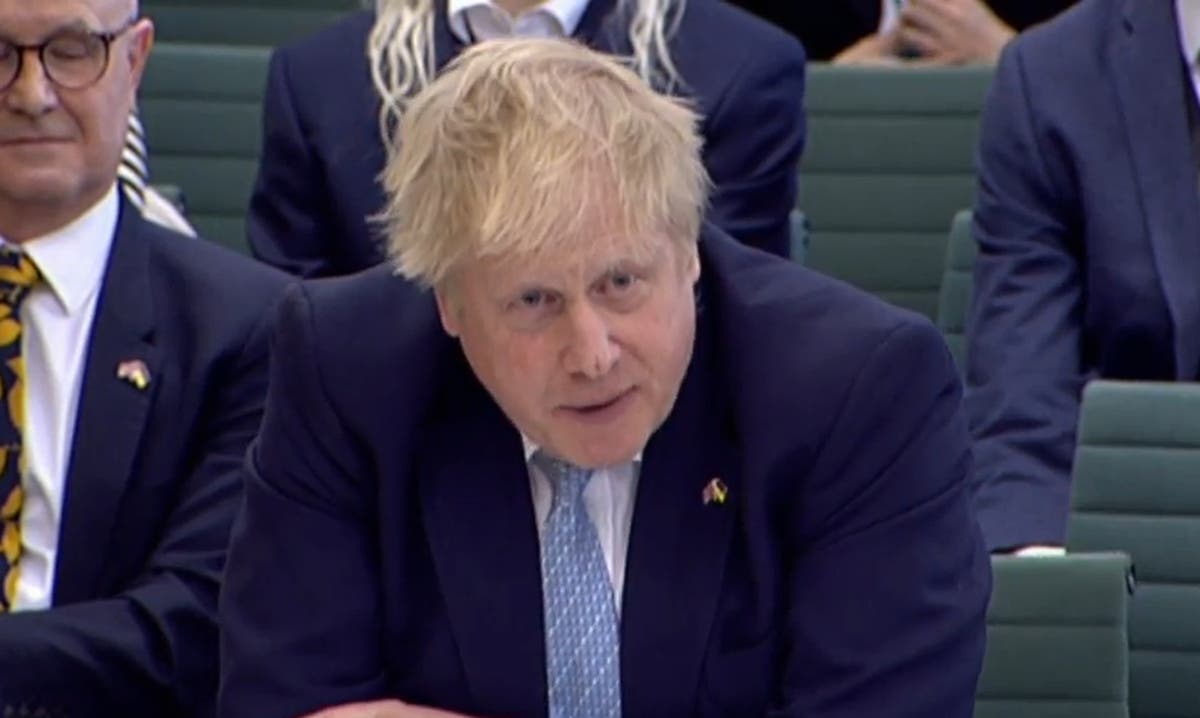 His comments have appalled environmentalists who believe the development of onshore wind power is a vital part of the UK’s move towards net zero carbon emissions by 2050.

Environmental think tank Green Alliance said it was “absolutely bizarre” to seemingly exclude one of the UK’s cheapest energy sources from the country’s future energy mix.

The Prime Minister is said to have leaned towards Business Secretary Kwasi Kwarteng’s desire to ease planning rules to allow more onshore turbines, in the face of opposition from ministers including Jacob Rees-Mogg.

But giving evidence to a parliamentary committee today, he singled out offshore wind farms as a priority for the UK’s future energy supplies. And he pointed to the fact that he was making a distinction with onshore developments by repeating the word “offshore”.

It has now been almost a month since Mr Johnson promised an energy security strategy ‘in the coming days’ to help wean the UK off its dependence on Russian oil and gas, ease pressures on the cost of living and to intensify the search for net zero. It is seen as crucial to break the deadlock on onshore wind in time to allow the document to be released next week, ahead of purdah ahead of local elections in May.

Outlining his plans for the long-delayed strategy, Mr Johnson told the Commons Liaison Committee: ‘In the UK we have failed for a generation to deliver enough long-term supply and that has been one of these colossal errors.

Green Alliance senior policy adviser Joe Tetlow said the government should show ‘leadership’ on onshore wind rather than shut it out for fear of a ‘not in my back yard’ response from communities close to the sites of the proposed facilities.

“They recognize that we need it for energy independence, for national security and to reduce bills. Of course, we need community support, but we also need political leadership.

And Danny Gross, energy campaigner at Friends of the Earth, said Mr Johnson ‘cannot afford’ to ignore onshore wind if he is serious about tackling the energy crisis.

“On average, it takes six years to develop an onshore wind farm, compared to 28 years for new oil and gas fields,” Gross said. “Johnson’s energy review must focus on unlocking the country’s enormous renewable potential, and that must include ending the unfair planning rules that stifle onshore wind.”

Mr Johnson has said he wants to accelerate a new generation of nuclear power in the UK, telling MPs that new small nuclear reactors (SMRs) being developed by Rolls Royce could be operational by the end of the 2020s.

But he said fossil fuels would continue to be part of the country’s energy mix, both as part of the transition to renewable sources and as part of hydrogen power generation.

He insisted that the ambition to put the UK on a path to net zero “has not been falsified or lost at all”. But despite the UK’s decarbonisation pledges at the Cop26 summit last year, he said it would be “very worthwhile” to continue oil and gas exploration in the North Sea.

Mr Johnson told MPs he could not claim any new nuclear reactors would produce electricity ‘in the next two years’.

But he added: “We have to look at expensive nuclear solutions – Sizewell and other projects – but we will also look at small modular reactors.

“The Qataris are just one of the countries that want to work with us on SMRs. There is a huge list of potential partners for Rolls Royce… If we don’t start now, we won’t solve the problem.

Mr Johnson’s remarks came after 14 Green groups called on the Government earlier this week to ‘unblock’ onshore wind in England.

Environmental groups have repeatedly pointed out that wind is popular, clean and cheap. A YouGov poll last year found that 70% of respondents favored the installation of more onshore wind turbines in the UK.

A more recent report from the Department for Business, Energy and Industrial Strategy found that 80% of people supported onshore wind.

In 2020, the government estimated that onshore wind would cost around £46 per megawatt hour by 2025, compared to £85 for gas. Estimates suggest it will be the second-cheapest energy source after big solar in 2025, according to Carbon Brief’s analysis.