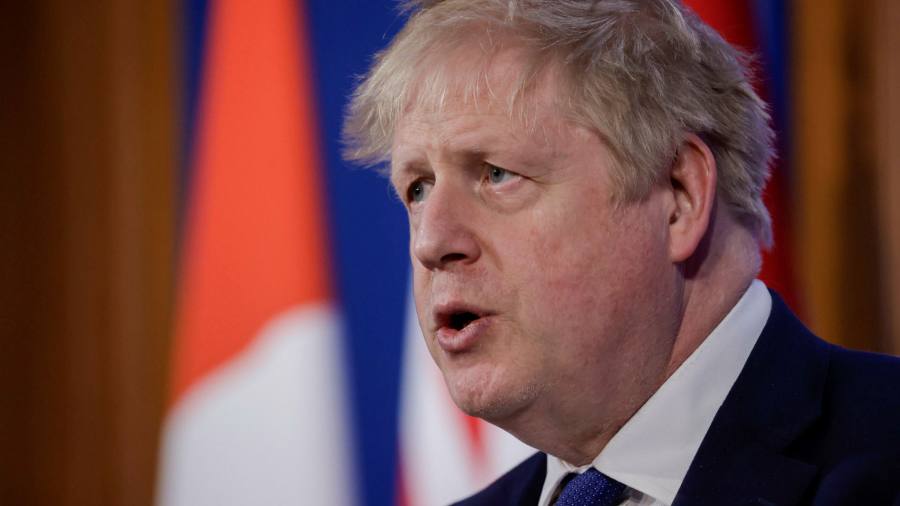 The Prime Minister insisted he was not abandoning the government’s commitment to cutting carbon emissions, but said the UK needed greater self-sufficiency in its energy sources.

As Britons grapple with a widespread cost of living crisis, the government’s new energy supply strategy is unlikely to bring additional immediate relief to households struggling with rising electricity and gas bills.

But with growing pressure on energy suppliers, government officials said the Treasury was preparing a second bailout worth hundreds of millions of pounds for Bulb, the electricity and gas supplier which entered in a special administration in November, unless a surprise bidder emerges.

The UK energy market is rocked by further sharp increases in the cost of oil and gas following Moscow’s full invasion of Ukraine.

Johnson told a press conference on Monday that ministers were considering the possibility of using more oil and gas from British sources.

“It’s absolutely the right thing to do to move away from dependence on Russian hydrocarbons, but we have to do it step by step,” he said.

“We have to make sure we have a replacement supply. One of the things we are looking at is the possibility of using our own hydrocarbons more. . . We need to increase our autonomy. »

Business Secretary Kwasi Kwarteng does not see shale gas as part of Britain’s energy mix and is resisting calls from Tory MPs to end the fracking ban.

Johnson, who has championed the UK’s commitment to net zero emissions by 2050, said Western countries would work together to find alternatives to Russian hydrocarbons.

UK wholesale gas prices followed higher oil prices on Monday after the United States said it was in “active discussions” with European countries over a ban on imports of Russian crude.

UK gas prices hit a new high of 800p per therm at one point in a volatile trading session, before falling back to 501p, up 8% on the day. A year ago gas prices in the UK were trading around 40p per therm.

Brent crude surged to $139 a barrel, before falling back to around $120. Average UK petrol prices have risen above £1.55 a liter for the first time, according to motoring group RAC.

Even before Russia invaded Ukraine, UK energy bills were set to soar after regulator Ofgem said the price cap for 22million households would rise by 54% in April to nearly 2,000 £ per year.

Experts say the price cap could reach between £3,000 and £3,400 a year in October when it is next reviewed.

Chancellor Rishi Sunak announced a £9billion package in February to help households pay their energy bills, which included a £150 Council Tax refund for properties in Bands A-D in England.

In November, Sunak set aside £1.7bn in working capital for Bulb to keep the business operational until April, after Ofgem concluded it could not transfer customers to rivals.

But with just three weeks to go until that support package expires, industry insiders say the special administrator is unlikely to find a buyer for Bulb, meaning Sunak would have to provide more working capital. .

A government spokesman said the special administrator was obliged to keep the costs of the process “as low as possible”.

Last year the UK met around 40% of its gas demand from domestic production, but analysts have said the proportion could rise slightly this year as projects such as fields come on stream. of Elgood and Blythe in the North Sea.

Climate change campaigners have said that putting new projects in place takes years and will not quickly solve the problem of soaring energy bills for households.

It takes three years on average to produce the first gas from a project after a company has received development permission, according to figures from the Oil and Gas Authority, the North Sea regulator.