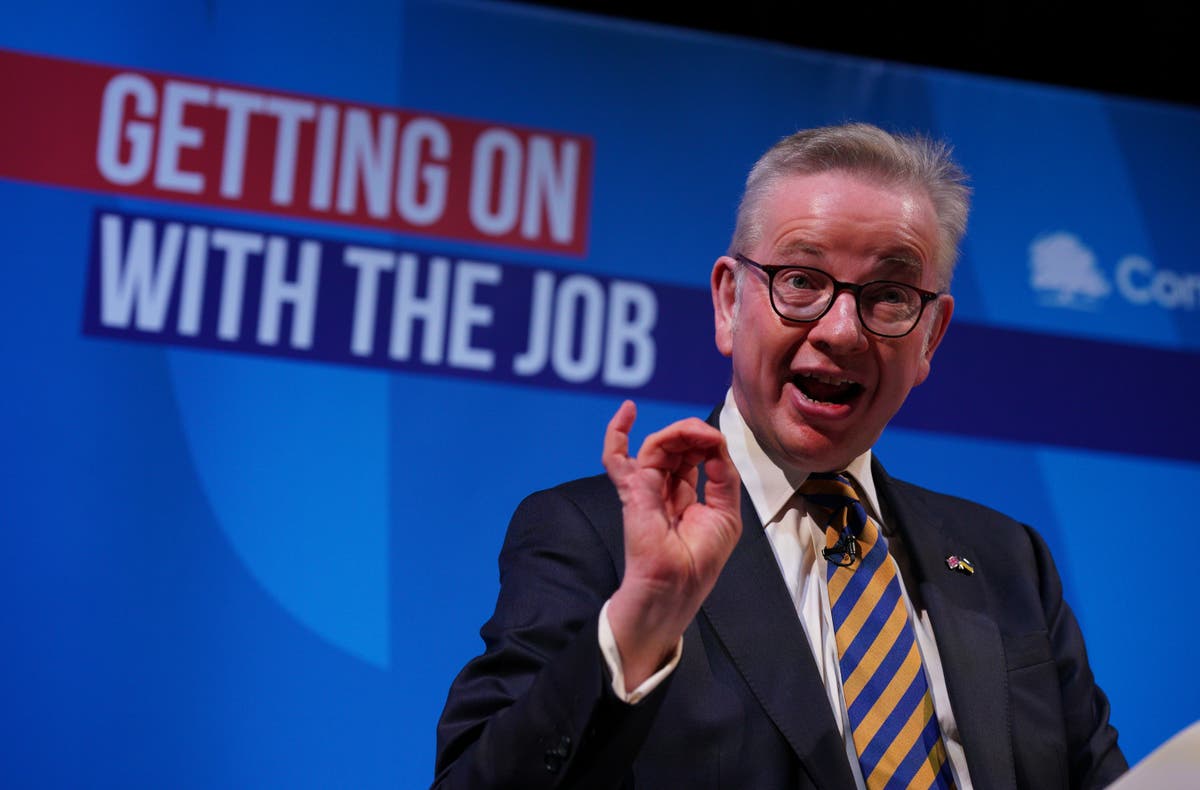 Michael Gove said he was “super cool” with the idea of ​​legislation to unilaterally tear up the Northern Ireland Protocol – despite the risk it could spark a trade war with the EU.

The upgrade secretary was reportedly furious that Foreign Secretary Liz Truss was pushing for sweeping action to remove protocol checks – but insisted on Wednesday he was relaxed about the plan.

When asked how angry he was with the move on a scale of 1 to 10, Mr Gove said AML: “Minus five. I’m super cool with that. I’m a big, big fan of Liz Truss.

However, Mr Gove also claimed that Boris Johnson was an “expert negotiator” and suggested that threatening to abandon the protocol could be part of the UK’s negotiating tactics.

It comes as Foreign Secretary Liz Truss said the UK ‘would not hesitate’ to take action on the Northern Ireland Protocol after Boris Johnson said the situation was ‘now very serious’ “.

Gove says no to emergency budget

“I don’t think we need an emergency budget. I think we have to make sure that we have the right balance between paying down our deficit, maintaining international market confidence and keeping interest rates as low as possible, while also targeting aid to poorer.

Scottish National Party leader Ian Blackford has praised the Labor Party leader for promising to step down if he is fined for Beergate.

The SNP leader said: “When it comes to Keir, I have to say he has shown leadership and leadership that has not been shown by the Prime Minister.

“I am sure that if Keir is wrong, then Keir will accept his responsibilities, as he should, because it is the dignity and respect of the office we all hold and of public life.”

Scotland’s equality minister has reiterated her “serious concerns” about the UK government’s plans to change the Human Rights Act.

Christina McKelvie has argued that the guarantees of the law are “an essential feature of a democratic society based on the rule of law”.

Proposals to introduce a Bill of Rights were confirmed in the Queen’s Speech on Tuesday, after a pledge to reform human rights laws was included in the Conservative manifesto in 2019.

The government has said the changes will strengthen “freedom of expression” and strike the “right balance” between the rights of individuals and effective politics.

But Ms McKelvie slammed the move and said the UK government risked interfering with the devolution settlement.

Ms McKelvie said: ‘Human Rights Law has successfully protected rights and freedoms across the UK for over 20 years. We will continue to vigorously oppose any attempt to replace it with a bill of rights.

“The safeguards provided by existing legislation protect every member of Scottish society. They are an essential feature of a democratic society based on the rule of law.

“These rights are also at the heart of the vesting regulations. No changes should be made without the express consent of the Scottish Parliament.

“At the same time, the Scottish Government is showing leadership on human rights by protecting and enhancing our rights and freedoms. Future Scottish legislation will further extend human rights safeguards.

People in Northern Ireland are being held ‘for ransom’ by the DUP and the UK government, Sinn Fein’s Stormont leader Michelle O’Neill has said.

“We cannot be used as a pawn in the middle of a game between the UK government and the European Union,” she said.

Cabinet Minister Michael Gove has effectively abandoned the Conservative Party’s pledge to build 300,000 new homes a year – saying he is no longer ‘bound’ by the target.

The upgrading secretary said “arbitrary” targets for housing numbers were less important than the quality of new housing and gaining community support.

He also said the Scottish government’s opposition to new nuclear power stations is preventing him from being part of a “renaissance” in the sector.

Speaking to Holyrood’s Net Zero Committee on Wednesday, an MSP responded to his comments on a windfall tax by saying the cost of living crisis is “killing people”.

Tory minister Mr Hands said world events had driven up energy prices and the UK government was unable to completely insulate consumers from this.

He said UK ministers were spending £22billion this year to help households with the cost of living.

Some of that help – like the energy bill support scheme, which will offer a £200 reduction in electricity costs – won’t kick in until October, he said.

German Chancellor Olaf Scholz has warned the leader against the British government’s threat to unilaterally tear up the Brexit protocol deal.

“No one should unilaterally nullify, sever or in any way attack the settlement we have agreed to together,” he said.

Belgian Prime Minister Alexander De Croo said: “Our message is quite clear: don’t touch this… If this agreement was revoked, then I would think the whole system would be revoked. I couldn’t see any other solution. »

It’s ‘bonkeroony’ that the PM is quitting over Partygate, says Gove

Communities Secretary Michael Gove said it was “bonkeroony” to suggest Boris Johnson should step down during the lockdown parties in Downing Street.

Mr Gove denied that a promise by Labor leader Sir Keir Starmer to step down if he is fined for breaking Covid rules has put pressure on the Prime Minister – even though he has already received a fixed penalty notice.

‘For anyone who has suffered during Covid, the thought that others have broken the rules is undeniably painful and difficult,’ Mr Gove said ITV’s Good Morning Britain.

“But it is also true that the Prime Minister was responsible for a series of very, very big decisions during the Covid crisis, which means that we now look better than many other countries.

“The idea that the Prime Minister should resign is crazy.

“That doesn’t diminish for a moment the pain that people have endured and the fact that mistakes have been made.

“I think it’s absolutely fair to say that you deeply regret that things went wrong, that people deserve to learn lessons, that there should be full acknowledgment, contrition and apologies, but that this does not deserve the resignation of a Prime Minister in office Minister.

“Whatever Keir Starmer wants to say or do is his business.”

Michael Gove has been criticized for ‘using silly voices’ as he appeared to attempt American and Scouse accents during a broadcast interview.

The Communities Secretary was talking about the prospect of an emergency budget on BBC Breakfast to tackle the cost of living crisis when he broke into the different accents.

Mr Gove spoke the words ‘an emergency budget’ and ‘big news in all caps’ with what sounded like an American accent.

He also said “calm down” in a Scouse accent, which reminded viewers of comedian Harry Enfield’s skit.

1.5million UK households will struggle to pay their bills next year due to the cost of living squeeze

An estimated 1.5 million households across the UK will struggle to pay their food and energy bills over the next year as the cost of living crisis continues to bite, according to new research.

The NIESR has urged Chancellor Rishi Sunak to take action to prevent households from collapsing under the burden of debt.

It comes as the government has come under heavy criticism for failing to provide concrete plans outlining how it will tackle the cost of living crisis and support struggling families.

Water crisis: a new ‘floating’ station could be the key to unlimited…