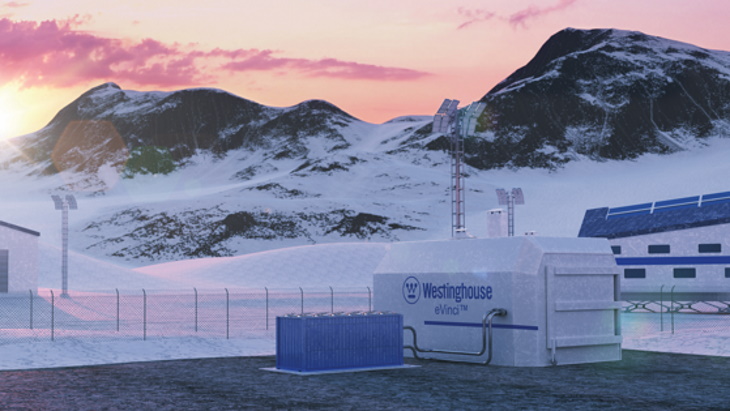 Westinghouse and the Saskatchewan Research Council (SRC) signed a memorandum of understanding on a project to locate an eVinci microreactor in Saskatchewan, while a memorandum of understanding between McMaster University, Ultra Safe Nuclear Corporation (USNC) and Global First Power (GFP) will further investigate the feasibility of deploying USNC’s Modular Micro Reactor (MMR) at the university or affiliate site.

The Memorandum of Understanding between SRC and Westinghouse Electric Canada will jointly develop a project to locate an eVinci microreactor in Saskatchewan for the development and testing of industrial, research and energy utilization applications.


Saskatchewan is home to the largest and richest uranium mines in the world, but currently has no nuclear reactors. Since 2019, it has worked with the provinces of New Brunswick and Ontario – later joined by Alberta – to advance the development and deployment of small modular reactors (SMRs) to combat climate change.

“For 38 years, the SRC has been the owner and licensed operator of a SLOWPOKE-2 nuclear reactor, and we look forward to building on that experience with Westinghouse,” said Minister responsible for the SRC, Jeremy Harrison. “The practical experience gained by SRC can be applied to emerging nuclear technology, such as SMRs, as we consider how best to power our future.”

“Modern nuclear reactors have the ability to provide the safe, clean, baseload electricity that the people of Saskatchewan rely on for their daily needs,” said Don Morgan, minister responsible for provincial utilities for SaskPower. “Advancing nuclear energy in our province will not only modernize our electrical grid, but will result in billions of dollars in additional economic activity.”

The eVinci is a heat pipe reactor that can produce 5 MW of electricity and 13 MW of high temperature heat, and can operate in cogeneration mode. Westinghouse says this “nuclear battery” provides power solutions on a different scale than centrally generated utility-scale power. It can support a variety of applications including remote mining operations, remote communities, individual industrial heat and power scenarios, distributed hydrogen generation, and integrated energy solutions.

In March, the Canadian government announced its intention to invest CAD 27.2 million (USD 21.6 million) in the eVinci microreactor through the Strategic Innovation Fund of Innovation, Science and Economic Development Canada (ISED). ).

McMaster University, UNSC and Global First Power said their new partnership will advance research into small modular reactors and help pave the way for Canadian communities considering adopting this new approach to zero energy. greenhouse gases, which will play a critical role in Canada’s Getting to Zero by 2050 network, the partners said. GFP – a partnership between USNC and Ontario Power Generation – is already working to deploy MMR technology from Seattle-based USNC in Canada and plans to build and operate a unit at Canadian Nuclear Laboratories’ Chalk River in Ontario.

Dave Tucker, assistant vice president, research (nuclear) at McMaster, said the recently announced partnership builds on the university’s rich nuclear expertise and follows its contributions to Canada’s PRM action plan. “Combining our capabilities with those of the USNC and GFP will allow us to conduct life cycle studies on the optimal use of SMRs and train the next generation of experts who will build, operate, maintain, monitor and will regulate these facilities,” he said.

The partnership is an important step in launching the university’s SMR feasibility study, Tucker said. The feasibility study is an estimated 18-month initiative in consultation with community, business and government stakeholders, including Indigenous communities and municipal councils.

“We have over 60 years of experience in the safe and efficient operation of a community nuclear reactor, and the resulting health, research and economic benefits continue to advance health and well-being. to be of society,” he said. “It is our responsibility to use our knowledge and expertise to help Canada achieve its Net-Zero goal.”

Much of the research and training will take place at the Chalk River site, said GFP President and CEO Dominique Minière. “It is the most advanced SMR project in the country and, arguably, in the Western world,” Minière said, adding that the project is expected to be operational in 2027.

The MMR is a 15 MW thermal and 5 MW electric high-temperature gas-cooled reactor, currently undergoing licensing in Canada and the United States. The University of Illinois at Urbana-Champaign notified US nuclear regulators last year of plans to build an MMR unit on its campus.

Japan to donate $2 million to IAEA for Ukrainian nuclear security