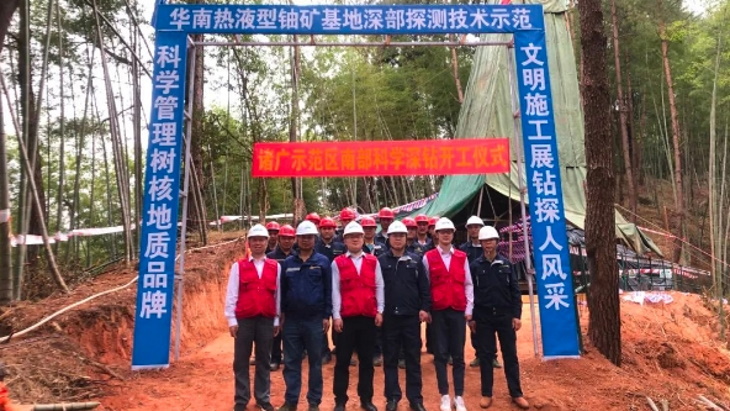 A demonstration project for deep underground exploration of hydrothermal uranium deposits in southern China recently passed national acceptance testing. At the same time, Chinese researchers have developed an innovative method for the pre-enrichment of uranium in seawater by membrane filtration.

Researchers from the DREAM demonstration project at the Xiangshan deposit (Image: CNNC)

The Deep Resources Exploration and Mining (DREAM) project – led by the Beijing Uranium Geology Research Institute of the China National Nuclear Corporation (CNNC) – has made multiple breakthroughs in the application of technologies and ‘advanced equipment in relevant scientific and technological research over the past four years. , CNNC reported.

A ceremony was held in December 2019 at the Xiangshan uranium deposit near the city of Fuzhou in China’s Jiangxi province to mark the start of the country’s deepest drilling project related to resource exploration. of uranium. The project team planned to carry out three-dimensional exploration of the deep mineralizing environment of the Xiangshan mining field to reveal the formation conditions of polymetallic uranium resource ore and to drill a 3,000-meter borehole of depth.

CNNC said that during the demonstration project, researchers successfully discovered industrial-grade uranium ores at a depth of about 1,550 meters, setting a new national record and “laying a solid foundation for further exploration.” future of mineral resources”. In terms of metallogenic depth, they proposed that the maximum depth of hydrothermal uranium deposits in southern China could reach 3,000 meters.

The project also made breakthroughs in the research and development of localization and deep exploration technologies and equipment related to hydrothermal uranium deposits, CNNC said. For example, the research team has developed a gamma ray spectroscopy logging system, which operates at a depth of 3,000 meters and has strong survivability in high temperature and high pressure environment.

Researchers from the Institute of Modern Physics (IMP) of the Chinese Academy of Sciences, in collaboration with teams from the Chinese University of Lanzhou and the University of Hebei, have developed a method based on graphene oxide from pre-enrichment of uranium in seawater by membrane filtration.

The ion rejection and enrichment properties of the Go-Gly membrane for uranium and major coexisting ions in single ion solutions (Image: IMP)

In a study published in chemical engineering journal, the researchers fabricated a new type of composite glycine cross-linked graphene oxide (GO-Gly) membrane with good ion sieving properties, which can meet the requirements of uranium pre-enrichment in water They say that the cross-linking of GO by glycine not only overcomes the swelling defect of the GO membrane in solution, but also meets the requirement of the channel size requirement for separation of uranium from coexisting major ions. In addition, the membrane structure can remain stable when immersed in aqueous solution for a long time.

The researchers then investigated the ion rejection and enrichment properties of uranium and major coexisting ions in single ion solutions and simulated seawater, respectively. It was found that nearly 100% of the uranium was rejected by the GO-Gly membrane. Moreover, only uranium was obviously enriched while the concentrations of the main coexisting ions remained almost constant by continuously filtering the simulated seawater with the membrane.

“This new method combined with traditional methods is expected to significantly improve the efficiency of uranium recovery and promote the actual application of uranium resources in seawater,” IMP said.

U.S. natural gas futures hit their highest level since 2008, tripling in a year: Why we said goodbye to cheap natural gas