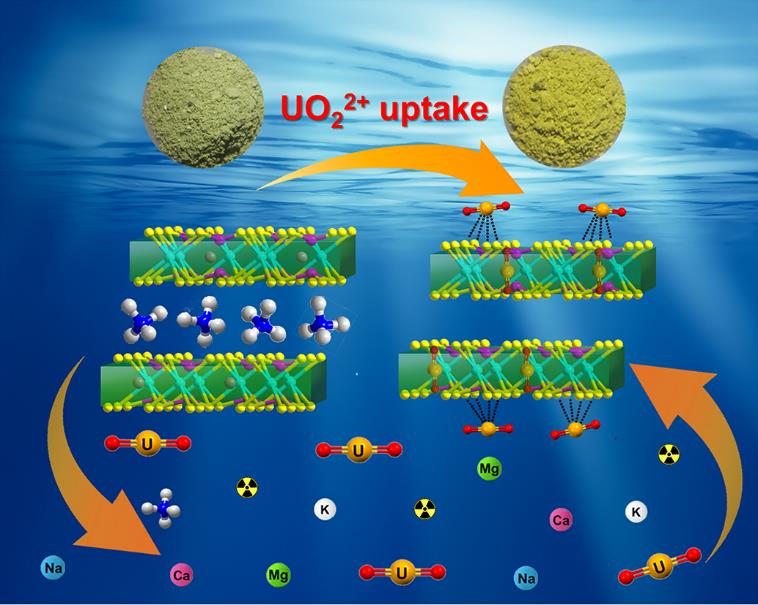 With the rapid development of nuclear power around the world, the demand for uranium continues to increase. As a result, large amounts of uranium-containing wastewater are generated throughout the nuclear fuel cycle as well as during the reprocessing of spent fuel. Uranium (U) is highly chemically toxic and strongly carcinogenic to the living system. Therefore, it is important to develop materials capable of capturing U (VI) ions efficiently and selectively.

In a study published in Chem. Ing. J., Prof. FENG Meiling of Prof. HUANG Xiaoying’s Research Group at the Chinese Academy of Sciences’ Fujian Structure of Matter Research Institute reported layered manganese thiophosphate intercalated with NH4+, namely (NH4)0.48Mn0.76PS3H2O (N-MPS), which could quickly and selectively separate U (VI) from complex solutions. This is the first report of a manganese thiophosphite intercalation compound (MnPS3) to efficiently enrich U (VI).

The researchers prepared the N-MPS by immersing a quantity of MnPS3 in 2 mol / L NH4Cl aqueous solution and stirring at room temperature for 24 hours. The prepared N-MPS exhibits good durability at pH (2.8-12.2) and good resistance to β / γ-ray irradiation (100-200 KGy).

In addition, they found that N-MPS exhibits exceptional capacity (much higher than that of some reported superior sulfide adsorbents), rapid kinetics and superb selectivity towards U (VI).

In particular, the distribution coefficient values ​​obtained in contaminated tap water and lake water are up to 2.23 × 104 ml / g.

It is important to note that the adsorbed U (VI) could be eluted by a gentle and environmentally friendly method for uranium recovery and adsorbent regeneration for at least five cycles.

Using various characterizations (Raman, XPS, Zeta potential and EXAFS) and batch adsorption experiments, the researchers revealed that the mechanism of N-MPS adsorption for U (VI) is the synergy of ion exchange and surface adsorption.

This study not only shows that intercalated metal sulphides have good application potential for highly efficient separation of U (VI) from wastewater, but also paves the way for the development of new high performance adsorbents by intercalation.

Schematic diagram of the MnPS3 layer intercalated with NH4 + (N-MPS) for uptake of U (VI). (Group image of Prof. HUANG)
/ Public distribution. This material is from the original organization / authors and may be ad hoc in nature, edited for clarity, style and length. The views and opinions expressed are those of the author (s). See it in full here.