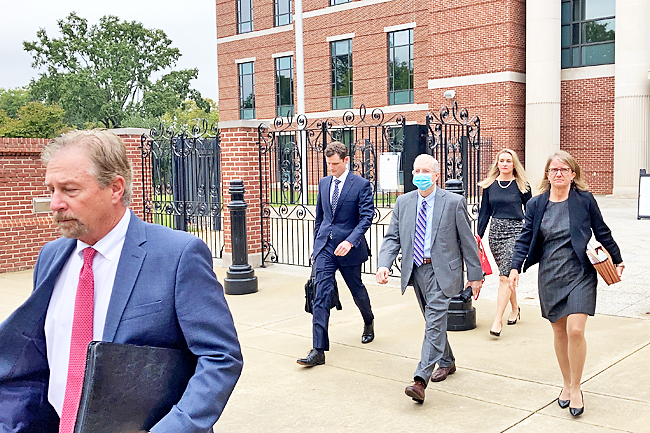 Former SCANA Corp CEO Kevin Marsh agreed with prosecutors that he should serve his sentence and the judge approved the deal, making him the chief executive behind bars for misleading the public about the project, which failed without ever generating a watt of power.

Marsh has said he wants to serve his sentence as soon as he can because his 46-year-old wife has incurable breast cancer, and he hopes to take care of her after she gets out of prison.

The judge agreed to have him report to a North Carolina federal prison in early December.

She said the prosecution and defense’s description of Marsh’s crime is a “vanilla way of describing it,” adding that she downplays the seriousness of the non-disclosure. â€œYour crime was committed with a bit more elegance and sophistication than many others that I see,â€ Geiger told Marsh. “But you don’t get credit for it.”

A second former SCANA executive and an official at Westinghouse Electric Co, the main contractor for the construction of two new reactors at the VC Summer plant, also pleaded guilty. A second Westinghouse executive has been charged and is awaiting trial.

Marsh pleaded guilty in federal court in February to conspiring to commit wire-and-mail fraud, and in state court to obtaining property under false pretenses.

Marsh is scheduled for a sentencing hearing in state court on Monday. Federal prosecutors said they would accept his request to serve his full sentence on both sets of charges in a federal prison.

The actions of Marsh and other executives have taken more than $ 1 billion from the pockets of taxpayers and investors, authorities said in an 87-page Securities and Exchange Commission lawsuit filed against him and a second executive in 2020.

SCANA and its subsidiary, South Carolina Electric and Gas, were destroyed by debt and mismanagement and were acquired by Dominion Energy of Virginia in 2019.

State-owned Santee Cooper, which held a 45% stake in the project, found itself in debt of $ 4 billion while SCANA controlled the management of the project.

Reading a statement Thursday, Marsh said he took responsibility for the failure of the project even though it had been misled by Westinghouse, who built the reactors.

â€œNot a day goes by that I don’t regret that these nuclear power plants weren’t built for the citizens of South Carolina,â€ he said. For sentencing, Marsh’s attorneys also submitted 10 letters from friends and colleagues detailing his good deeds, such as helping the family of an employee killed on the job get financial and legal aid, getting an air conditioner for a women’s hostel and take a week out of her busy management schedule to volunteer for vacation school.

The letters also detailed his relationship with his wife, Sue, whom he married when the two
were teenagers.

She has terminal and incurable metastatic breast cancer and may not be able to visit her husband in prison due to COVID-19 fears and her debilitated state, defense lawyers have said .

Federal regulatory documents documented the history of the doomed nuclear project that began in 2008. These documents indicated that Marsh had never hesitated to say that the two reactors under construction at VC’s summer site north of Columbia would be completed by the end of 2020 – a deadline that had to be met to receive the $ 1.4 billion in federal tax credits needed to keep the $ 10 billion project from overwhelming the utility.

Prosecutors said Marsh lied and presented upbeat projections about the progress of reactors he knew were wrong by winning calls, presentations and press releases to keep investors happy and push up the company’s stock price.

After watching the hearing, environmental activist Tom Clements waited outside for Marsh.

He has fought the reactors since they were first proposed in 2008, claiming they were unnecessary.

“Kevin, why didn’t you apologize to the people of South Carolina?”

â€œYou accepted the responsibility, but you couldn’t apologize to us the taxpayers,â€ Clements asked Marsh as he walked for 20 seconds from the courthouse door to a waiting SUV.