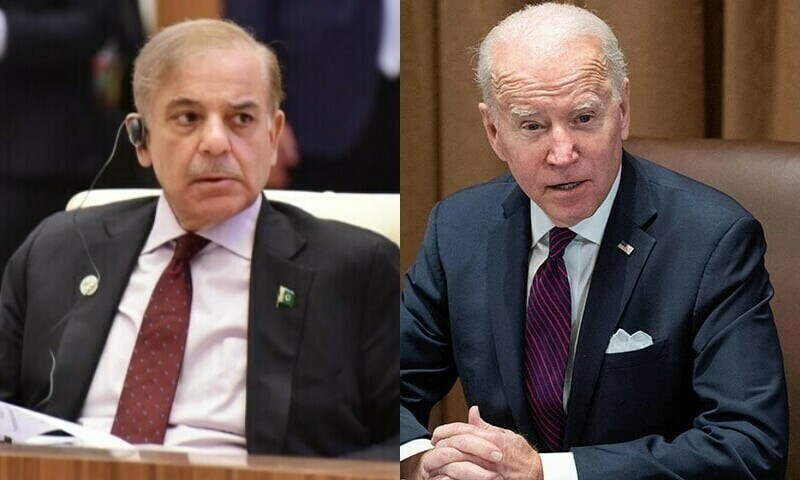 Prime Minister Shehbaz Sharif dismissed US President Joe Biden’s comments on Pakistani nuclear weapons as “factually incorrect and misleading”, according to a press release from the Prime Minister’s Office (PMO) on Saturday.

At a Democratic Congressional campaign committee reception on Thursday, Biden said Pakistan could be “one of the most dangerous nations in the world” because the country has “nuclear weapons without any cohesion.”

A transcription of the address, posted on the White House website, quoted Biden as saying, “…And what I think is perhaps one of the most dangerous nations in the world: Pakistan. Nuclear weapons without any cohesion.

Hours after the Foreign Secretary announced that a formal demarche would be made to the US envoy, Prime Minister Shehbaz issued a detailed statement in response to Biden’s remarks.

He said Pakistan had proven to be a “most responsible nuclear state” over the past decades, whose nuclear program was managed by a “technically sound and infallible command and control system”.

“Pakistan has also consistently demonstrated responsible stewardship of its nuclear weapons capability, marked by a very strong commitment to global standards, including those of the IAEA (International Atomic Energy Agency). on non-proliferation, safety and security.”

The press release states that the real threat to international peace and security is “ultra-nationalism, the violation of human rights in regions struggling against illegal occupation, the violation of by some states, the repeated nuclear security incidents, the arms race between the major nuclear-weapon states and the introduction of new security constructs that upset the regional balance”.

He added that Pakistan and the United States had a long history of “friendly and mutually beneficial relations”, further saying that it was “crucially important that genuine and sustained efforts be made to recognize the real potential relations between Pakistan and the United States” at the same time. as the world faced tremendous global challenges.

The press release said “unnecessary comments” should be avoided and that Pakistan’s “sincere desire” was to cooperate with the United States to promote regional peace and security.

On Twitter, Prime Minister Shehbaz said Pakistan was unequivocally a responsible nuclear state that takes the issue of nuclear security with the “utmost seriousness”.

“Let no one have any doubts,” he tweeted, adding that he was proud that the country’s nuclear assets had the “best” safeguards as required by the IAEA.

Defense Minister Khawaja Asif also responded strongly to Biden’s comments, saying Pakistan’s record as a responsible nuclear power was “flawless and internationally attested, unlike the existence of WMDs (weapons of mass destruction) in Iraq” – referring to US claims. about WMD’s presence in Iraq which were later debunked.

“We have also historically provided military assistance to the very armed forces whose commander-in-chief wrongly calls our ‘cohesion’ into question,” the defense minister said.

Later in the day, a A Foreign Office press release said Acting Foreign Secretary Jauhar Saleem had called on US Ambassador Donald Blome to make a “vigorous push” for Biden’s comments.

“Pakistan’s disappointment and concern was conveyed to the US envoy over the unwarranted remarks, which were not based on reality or facts on the ground.

“It has been made clear that Pakistan is a responsible nuclear state and that its impeccable management of the nuclear program and its adherence to global standards and international best practices are well recognized, including by the IAEA,” the press release reads. .

He said maintaining the positive trajectory of Pakistani-US relations and the close cooperation between the two sides is essential to building regional and global peace.

Any questions should be directed to India: FM Bilawal

Earlier in the day, Foreign Minister Bilawal Bhutto Zardari said the government had decided to summon Blome for a formal demarche over Biden’s remarks.

At a press conference at the Bilawal House in Karachi today, the foreign minister said Pakistan’s nuclear assets ‘meet all international standards in accordance with IAEA for safety and security’ .

“If there are questions about nuclear security, then they should be directed to our neighbor India, which very recently accidentally fired a missile into Pakistani territory.

“This is not only irresponsible and dangerous, but raises genuine and serious concerns about the security of nuclear-capable countries,” he said.

“I am surprised by the words of President Biden […] I believe this is exactly the kind of misunderstanding that is created when there is a lack of commitment.

Bilawal said Pakistan had embarked on a “journey of engagement” and had just marked the 75th anniversary of bilateral engagements with the United States.

“If it was such a concern, I imagine it would have been raised in this meeting with me, I believe we have just started our journey of engagement and we will have many more opportunities to engage with the United States and address any concerns and misconceptions they may have on this specific issue.

We called the ambassador for a step, he said, adding that the United States should be given an opportunity to explain the position.

“I don’t believe this has a negative impact on Pakistan-US relations. We will continue on the positive trajectory of commitments we have so far,” Bilawal stressed.

He went on to say that Pakistan had nothing to do with Biden’s statement. “We’ll call their ambassador and issue a demarche, but I don’t think that’s an official function. […] it was not an address to parliament or an interview.

“It was a fundraiser […] it was a non-traditional conversation in which this phrase was used, so it should be [looked at] in this way, I think we will look at this statement in this way, ”he explained.

However, at the same time, Bilawal said the nation should refrain “from getting into conspiracy theories”.

He said if the government had felt pressured, it would have been made known to the public. “But there is no such problem, we have different positions on different issues, but when you are responsible and mature states, you engage.”

There are many opportunities for Pakistan to positively engage with the rest of the world, he added.

Responding to a question, Bilawal said that PTI leader Imran Khan was a liar and it was the government’s responsibility to expose its reality before the nation.

He claimed that during his tenure as Prime Minister, Imran did not keep any of the promises he made to the people.

“Today we try to correct this loss […] we will have to work hard, but I am convinced that the direction of our foreign policy is right now.

Continuing, he recalled that Imran had made “irresponsible statements” about the country’s nuclear assets in the past. “When he had to leave the Prime Minister’s seat, he said publicly that it was better for an atomic bomb to be dropped on Pakistan.

“Find me an example in the history of the world, where a person who is a former prime minister, says such things about his own country.”

Bilawal went on to say that Imran had been given an authority that no other prime minister had received in the country’s history. “The amount of grips and diaper changes that happened with Imran hasn’t happened with any other PM.”

Imran, the minister added, wanted to be selected again today.

“But we believe that the right to govern this country belongs to the people. The experiences of playing with the destiny of the nation have, every time, had the opposite effect, so we have to trust the outcome of people’s trust,” he added.

Speaking about Pakistan’s stance on Ukraine, Bilawal explained why the country abstained from voting on a resolution passed at the UN General Assembly earlier this week.

The resolution calls on countries not to recognize the four regions of Ukraine claimed by Russia in referendums held under its occupation.

At today’s press conference, the minister said there were two reasons why Pakistan abstained from voting. “The resolution contained language from other past resolutions from which Pakistan had already abstained.

“And there was no call for an immediate cessation of hostilities and continued diplomacy in the pursuit of peace,” he explained, then read parts of the explanatory note submitted by the Pakistan.

Bilawal also said he looked forward to seeing similar concerns over India’s action to annex the internationally disputed territory of Kashmir which he said was a complete violation of international law and relevant resolutions of the United States. ‘UN.