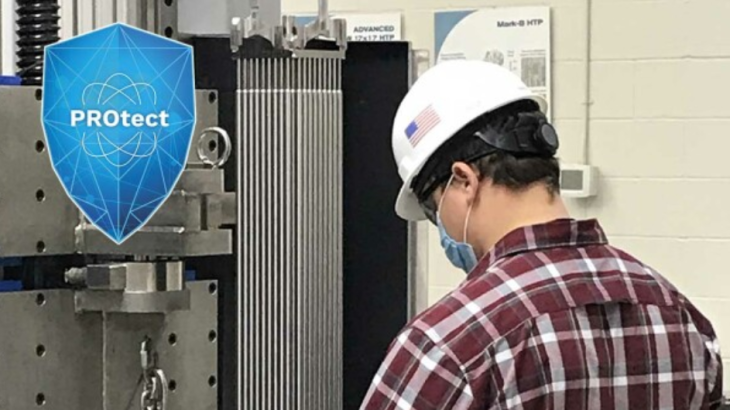 Framatome announced yesterday that its first 100% Accident Tolerant (ATF) fuel assembly has been delivered to the Exelon Generation nuclear power plant at Calvert Cliffs in Maryland, United States. The assembly – described by the company as a “first” in the nuclear industry – was loaded into one of the plant’s two pressurized water reactors during a recent refueling shutdown.

The Lead Fuel Assembly (LFA) contains 176 chrome coated bars and chrome reinforced pellets, and was developed with funding from the United States Department of Energy (DOE) as part of Framatome’s PROtect program. The complete ATF assembly builds on previous work that included performing an 18-month fuel cycle test on the LFA in the United States and Switzerland.

The first complete fuel assembly builds on previous work that included performing an 18-month fuel cycle test on an LFA in the United States and Switzerland. The assembly was fabricated at Framatome’s manufacturing facility in Richland, Washington, under a 2019 contract with Exelon Generation.

ATF designs aim to improve performance during normal operation of nuclear power plants and give operators more time to react in the event of a loss of active cooling. Such fuel can incorporate the use of new materials and designs for the fuel cladding and pellets. Framatome, GE / GNF and Westinghouse are all developing ATF concepts for light water reactors, with help from DOE funding, and Russian fuel company TVEL is developing ATFs for use in Rosatom’s VVER reactors and in Western PWRs.

“The use of this fuel demonstrates our continued commitment to innovation and the identification of new technologies that will improve reliability while maintaining our exceptional operational and performance standards,” said Tom Haaf, vice president of the Calvert site. Cliffs.

What the US can learn from the UK about wind power

Energy and Infrastructure Bill: How will it solve traffic jams and help nuclear and…