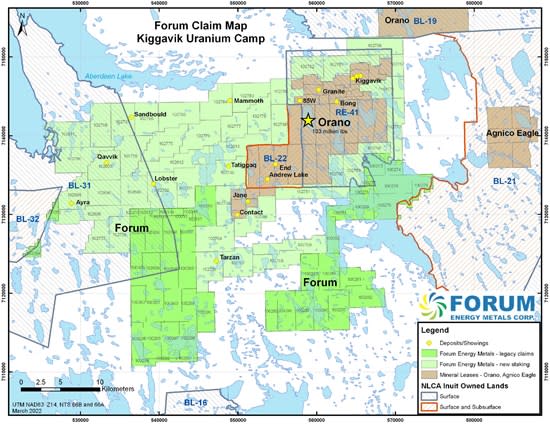 Forum to advance its uranium project in Nunavut; Appoint the technical team and initiate the authorization process

Rick Mazur, President and CEO, said, “Rebecca has been instrumental in the exciting beginnings of the Tatiggaq and Qavvik discoveries and brings a wealth of geological knowledge to Forum. Leon has lived and worked in Nunavut for eight years and understands the unique operating conditions of the project. with Nunavut regulators and communities for over twenty-five years. Our team is committed to the successful discovery of a Level 1 uranium deposit adjacent to Orano’s Kiggavik development project.

Rebecca has 15 years of experience as a uranium exploration geologist in Saskatchewan and Nunavut. Dr. Hunter worked for Cameco as a project geologist from 2005 to 2016. Rebecca led Cameco’s Turqavik-Aberdeen exploration project, which discovered the high-grade Tatiggaq and Qavvik uranium deposits adjacent to the Orano’s (formerly AREVA) Kiggavik project in Nunavut. Dr. Hunter has completed her Ph.D. at Laurentian University, which focused on the lithogeochemistry, structural geology and uranium mineralization systems of the Tatiggaq-Qavvik uranium corridor in the northeastern Thelon Basin. Mr. Hunter is currently Senior Minerals Geologist with the British Columbia Geological Survey.

Denise (Lockett Consultation Services Inc.) has worked in communications, permits and sustainability for over 25 years, primarily in the Northwest Territories and Nunavut. It ensures that the flow of communications goes both to/from affected communities, and to/from regulators and government officials regarding the proposed exploration or development project. Denise focuses on solutions to socio-economic problems and environmental management and mitigation. She is an active member of the Northwest Territories and Nunavut Chamber of Mines as a strong supporter of consultation with affected communities.

Leon has worked in the exploration industry since 2000 when he began to dive into the trades. What started as exploration support has evolved into full-time remote camp management and logistics coordination since 2012. Leon has focused his expertise in Nunavut and Saskatchewan on all facets of camp operations, from design to implementation and operations. Leon is currently with SSR Mining Inc. where he works with their exploration camps.

Since announcing the acquisition of land formerly owned by Cameco (see press release dated February 1, 2022), Forum has staked four more claims bringing its total new stakes to 60,230 hectares (Figure 1). Permit applications are being finalized and will be submitted shortly. Initial contact with Baker Lake elders has been made and community engagement will begin.

Cameco drilled 135 holes for a total of 36,000 meters from 2008 to 2012, which discovered the Tatiggaq deposit (approximately 5 km west of Orano’s Andrew Lake deposit), the Qavvik deposit and the Ayra showing and tested three other targets identified by geophysical surveys.

the Tatiggaq discovery consists of two zones, the Main and West zones which have an average thickness of 30 meters between 80 and 100 meters depth with strike lengths between 60 and 80 meters, respectively. Some important interceptions are:

Tatiggaq lies within a large area of ​​clay weathering measuring 0.8 km wide by 1.5 km long. (Figure 2). The potential exists for considerably increase the size of this deposit which will be the subject of the drilling program proposed by Forum in 2023, in addition to monitoring Qavvik, Ayra and other targets on the property.

THELON BASIN – AN ANALOG OF THE ATHABASCA BASIN

There are many Proterozoic basins around the world, but only two are economic; the Athabasca Basin in Saskatchewan, Canada and the McArthur Basin in the Northern Territory, Australia. The third promising Proterozoic basin for economic uranium deposits is the Thelon Basin in Nunavut, Canada, which so far has three deposits proposed for development (Figure 3). The Kiggavik uranium project is 66.2% owned by Orano Canada, 16.9% by Denison Mines and 16.9% by UEX Corporation. Orano (formerly Areva) submitted a development proposal in 2008 for the Kiggavik uranium project of 133 million pounds at an average head grade of 0.46% U produce 7.8 million pounds of uranium per year over a 17-year mine life from three deposits – the open pit Kiggavik and Andrew Lake deposits and the underground End deposit (Source: *Areva Resources Canada Inc., The Kiggavik Project, Project Proposal, November 2008 and Kiggavik Popular Summary, April 2012 submission to the Nunavut Impact Review Board).

Orano conducted six years of engineering, environmental and community engagement studies from 2008 to 2014 and submitted a final environmental impact statement to the Nunavut Impact Review Board (NIRB) on October 2, 2014. Despite compliance with all the conditions of the CNER project review, Orano may not commit to a firm project start date, due to the economic conditions of the uranium market at the ‘era. CNER recommended on May 8, 2015 that the project not proceed if a definitive development schedule could not be established. The project is currently in the care and maintenance phase.

Mineral Exploration and Development in Nunavut

The Territory of Nunavut was formed in 1999 under the Nunavut Land Claims Agreement Act (“NLCA”) between the indigenous Inuit people and the federal government of Canada. Under the NLCA, certain areas of the territory have been designated as surface and underground Inuit Owned Lands, which gives Inuit certain mining rights. Nunavut is a jurisdiction that has proven that mining is an important activity for the benefit of all Nunavummiut (residents of Nunavut), as demonstrated by existing mining operations at Meadowbank, Meliadine and Hope Bay gold mines. Agnico and Baffinland’s Mary River iron ore mine.

Rick Mazur, P.Geo., President and Chief Executive Officer of Forum and Qualified Person under National Instrument 43-101, has reviewed and approved the contents of this press release.

Figure 2: The Tatiggaq deposit is located within a large gravity anomaly that remains open at depth and laterally for 1.5 kilometres. Drill fences northeast of the West and Main deposits are proposed for 2023.

Figure 3: Location of Athabasca Basin, Saskatchewan and Thelon Basin, Nunavut. These two geological areas of the Canadian Shield are home to the richest uranium deposits in the world.

Forward-looking information is subject to known and unknown risks, uncertainties and other factors that may cause Forum’s actual results, level of activity, performance or achievements to be materially different from those expressed or implied by such forward-looking information. These factors include, but are not limited to: historical data uncertainties, work expenditure commitments; the ability to raise sufficient capital to fund future exploration or development programs; changes in economic or financial market conditions; changes in commodity prices, litigation, legislative, environmental and other legal, regulatory, political and competitive developments; technological or operational difficulties or an inability to obtain the permits required to maintain or advance its exploration projects.

ON BEHALF OF THE BOARD OF DIRECTORS

To view the source version of this press release, please visit https://www.newsfilecorp.com/release/117604

Energy in crisis: nuclear power on the agenda | Podcasts