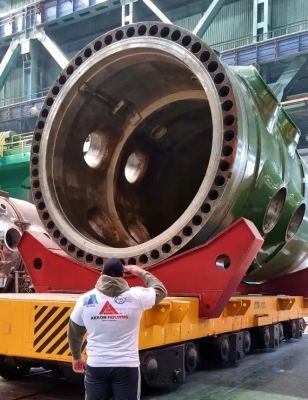 Their passion for lifting and moving heavy weights reached another level on Tuesday when a team of four Russian athletes set a world heavyweight movement record.

And, it was not a truck or a rock but a nuclear reactor that they moved to achieve the feat!

Russian powerlifting athletes Yuri Kuzmin, Yegor Sorokaletov, Evgeny Osipov and Alexey Islentyev have decided to celebrate September 28 as “Nuclear Industry Workers’ Day” – a professional holiday for workers in the nuclear industry in the country – in a special way yesterday.

At an event at the Atommash factory in Volgodonsk (part of the machine building division of Rosatom – Atomenergomash JSC), the four powerlifters moved a nuclear reactor vessel, loaded onto a self-propelled cart, to a distance of 3 meters 55 centimeters.

The total weight of the cargo was 452 tons.

Hundreds of workers at the Russian state-owned atomic energy company Rosatom, which has one of the largest portfolios of foreign projects in the world with 35 power units at various stages of implementation in 12 countries, including the India applauded when the champion athletes moved the nuclear reactor.

The event was part of the “Strongest Nation in the World” project, an initiative launched by power sports world record holder Mikhail Paller, who also enjoys the support of Russian President Vladimir Putin as he combines the sport with patriotism.

The athletes dedicated the record to all workers in the nuclear industry who were celebrating their annual trade fair.

â€œNo one in the world has ever towed a nuclear reactor. But we not only wanted to set a world record, but also to draw attention to the fact that our country is the world leader in nuclear energy. We have a lot to be proud of! At the same time, we strive to motivate our boys and girls to do more sports and lead a healthy lifestyle, â€said Mikhail Ivanov, the organizer of the record.

Previous achievements of the athletes of the “strongest nation in the world” included the towing by three athletes (Mikhail Paller, Alexey Savchenko and Mikhail Ivanov) of a railway train with a total weight of 1096 tons at a distance of more of 9 meters and a container loader weighing more than 82 tons by Oksana Kosheleva at a distance of 55 centimeters.

Rosatom said the VVER reactor vessel which “participated” in the case is not intended for installation in nuclear power plants. This is “training” – where skills in non-destructive testing and other production operations are honed at the factory.

Disclaimer: This article was posted automatically from an agency feed without any text changes and has not been reviewed by an editor