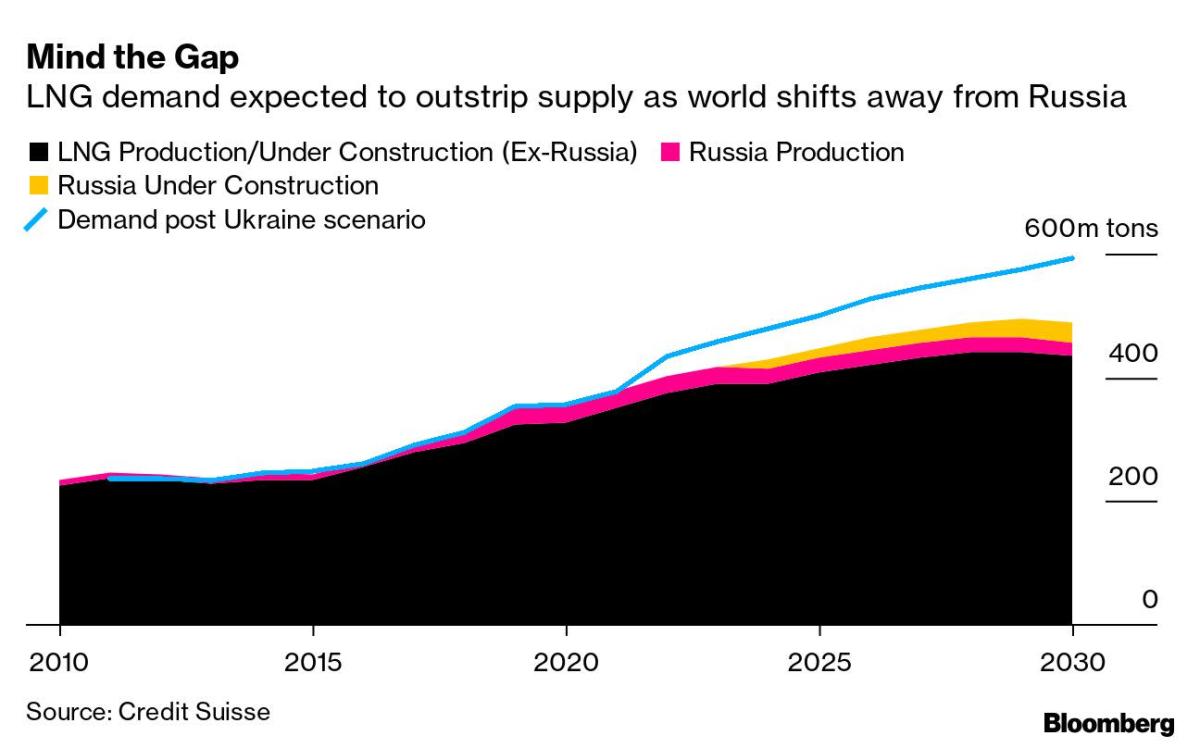 (Bloomberg) – The delicate balance in the natural gas market is collapsing, putting the global economy under pressure as nations struggle to get enough fuel.

War, the energy transition, bad weather and exploding demand are creating a period of upheaval that is tightening supply like never before. Nations and companies are scrambling to get enough gas amid a global energy crisis as economies recover from the pandemic.

Natural gas is a key part of the global economy that keeps factories running, lights on and homes warm. Competition for limited fuel supplies will only worsen if current conditions persist, with skyrocketing prices and supply gaps threatening to upend economies, spur inflation and cripple supply chains. ‘supply.

“Today’s market is one of the toughest I’ve ever seen,” said Susan L. Sakmar, visiting assistant professor at the University of Houston Law Center. “The world needs a bigger energy pie to share. Absent a global recession or multiple growth-stifling Covid lockdowns, I suspect that many parts of the world will face energy shortages.

The world was already facing the risk of a gas shortage this winter, as a post-pandemic rebound in demand outstripped supply. The crisis lasted for years: countries became more dependent on gas as utilities reduced coal consumption and expanded intermittent renewable sources, while shutting down nuclear reactors following the 2011 Fukushima disaster. Meanwhile, suppliers have been slow to ramp up production.

Fortunately, milder temperatures in Europe and parts of Asia this winter dampened demand for heating oil and allowed utilities to save on existing inventory. Traders are now joking that praying for mild weather will become a seasonal tradition as a snowstorm in Beijing or heatwaves in the UK can trigger record price swings and crippling supply shortfalls.

And now the war has dealt an unexpected and devastating blow to such a fragile market.

Europe’s effort to stop most Russian gas imports means it will go head-to-head with Asia for supplies of reserve liquefied natural gas, when there is no insufficient investment in new production to meet growing demand. The European Union’s proposal this week to ban imports of Russian coal puts additional pressure on the market, as power generators may need to turn more to gas to generate electricity.

In the longer term, the balance between LNG supply and demand is likely to go haywire further, especially if Russian gas is withdrawn. The global market could miss nearly 100 million tonnes a year by the middle of the decade, according to a Credit Suisse report last month. This is more than the annual demand of China, the world’s largest buyer of LNG.

“Even before the Russia-Ukraine crisis, the global LNG market was tight with record prices,” said James Taverner, senior director of S&P Global. “The tightness of the market is expected to persist over the next few years. Prices will likely continue to see wild swings day by day. »

Already, spot prices for natural gas are so high that major global buyers in North Asia are choosing not to replenish their inventories with additional overseas purchases. They are instead betting that this summer will be mild, or that a peace deal between Russia and Ukraine will lead to lower prices, said traders, who spoke on condition of anonymity to discuss private details.

LNG importers in China and India have drastically reduced spot purchases and are instead maximizing domestic supply and consuming stored gas, traders said. This strategy will help save money, but comes with huge risk that leaves little room for surprises – a gamble that hasn’t paid off recently.

If there is a sudden increase in gas demand, or if a contracted shipment cannot be delivered due to a production problem, some of Asia’s major consumers could run out of gas this summer or the next winter. They will be forced to go back to the spot market and buy very expensive fuel shipments or cut gas deliveries to door-to-door customers.

The Europeans will also expect a mild summer in Asia due to the need to extract spot LNG and fulfill their storage mandates. The European Union is pursuing a target of a storage filling level of 80% by November, compared to around 26% currently. This is achievable if Russian pipeline flows are stable and European prices beat Asian rates to attract available LNG, according to BloombergNEF.

At present, Russia continues to supply the market and Europe has avoided sanctions on this gas. However, a sudden drop in Russian exports – either through sanctions or unilateral action by Moscow – would wreak havoc, with the destruction of demand being the only option to keep the market balanced.

Russian gas is so important to Germany that stopping imports immediately would trigger a recession, according to Christian Sewing, CEO of Deutsche Bank AG. It would intensify the global race for alternative gas, sending prices to new highs and leaving many countries without enough fuel to power their economies.

The unfolding global energy crisis poses higher risks than the oil shocks of the 1970s, according to energy historian Daniel Yergin.

“It involves not only oil, but also natural gas and coal, and it involves two countries that happen to be nuclear superpowers,” he said in an interview with Bloomberg TV. If there’s an interruption in gas deliveries, “you’re going to see industries shut down, you’re going to see prices go up. This means that macroeconomic forecasts will have to be revised downwards.

For cash-strapped emerging countries in South Asia and South America, the situation is dire, as governments may be forced to limit electricity or heating fuels for households. Argentina paid around $750 million for eight LNG shipments for delivery from May to June in a tender last month. That’s about 20 times higher than the price they paid for similar shipments in 2020, and threatens to drive up electricity bills.

Pakistan is also in a difficult position as the government can no longer afford to buy fuel shipments overseas and struggles to find alternatives. According to local reports, power stations in Pakistan are running out of fuel and are pleading with the government to provide more supplies. With prices remaining high, fuel shortages are likely to spread to Bangladesh, India and Thailand.

“Energy poverty in parts of Asia could be the result of Europe sucking LNG shipments away from their original destinations,” said Saul Kavonic, energy analyst at Credit Suisse Group AG.

(Updates with Daniel Yergin’s comments in the 17th and 18th paragraphs.)