heat waves – in red and black | How can we keep half nuclear, half renewable?

No. Just as it was impossible to assemble an economy with a half-slave, half-free workforce, a half-nuclear and half-renewable energy house is also impossible. Nuclear power and renewable energy are irremediably incompatible. Yet the General Assembly and the Governor’s Clean Energy Jobs Act 2021 (CEJA) will attempt to build our future energy house with both. Wear a helmet and watch out for falling debris.

Renewable energy, particularly solar energy, is highly variable with large up and down fluctuations in energy production. To keep the lights on, solar power must be paired with enough distributable power to “go up” when the sun goes down and then “go down” when the sun rises. Gas plants are designed for these fast ramps. And the batteries are much better than gas picks.

Nuclear power is the least distributable source of energy. Nuclear reactors can be designed to scale up quickly – reactors on nuclear attack submarines, for example – but America’s commercial power reactors were built to run smoothly and always. Commercial reactors have 12 hours to go from a cold start to full power, and operators then want to keep it near that level. In contrast, it takes 5 minutes or less for the cold cranking gas spikes to reach full power, and less than a second for the batteries to do the same. Commercial nuclear weapons can operate with some ease of dispatch, but at additional operating and maintenance costs as well as an increased risk of operational errors. The increase in nuclear risk is unacceptable, and Exelon does not receive $ 3 billion in grants because their plants are agile champions of efficiency that can absorb the additional costs. Significantly increased shipping capacity is not part of the nuclear game plan. 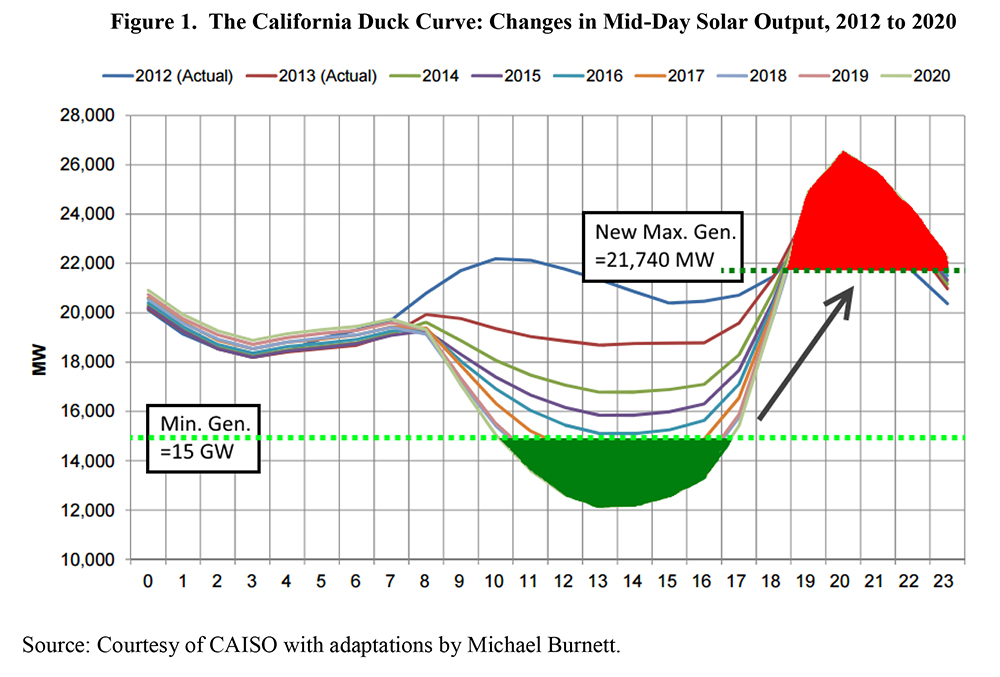 However, fast shipping is exactly what the solar “duck curve” in Figure 1 requires. 2012 to 2020. CAISO has shown that the net load on the grid – the amount of electricity supplied by fossil and nuclear power plants – will increase from around 21,000 to 12,000 megawatts. Due to the huge drop in net load from noon 2012 to 2020, the shape of the net load resembles a large duck, its belly distended in 2020 the result of 10,000 megawatts of solar power replacing fossil nuclear power. .

This couldn’t happen because California had 15,000 megawatts of undistributable electricity that could not be turned off. CAISO would be forced to cut at least 3,000 megawatts of solar generation to avoid major reliability issues. (The green part of the duck curve represents megawatt hours of reduced solar power.) Then there would be a huge ramp of over 10,000 megawatts from 5 p.m. to 8 p.m. when the sun went down and people went down. used energy at home. What could have happened in California by 2020 will happen before 2030 in Illinois under CEJA.

Solar was designed to follow fast-flying ducks, not waddle behind heavy nuclear turtles. Even so, Illinois politicians chained solar power to a sclerotic turtle. It won’t work. Next month, we’ll take a look at the renewable energy rampage by teaching the Illinois Duck how to fly.

CAISO. 2013. What the duck curve tells us about the management of a green network. California ISO; https://www.slideshare.net/PowerSystemOperation/what-the-duck-curve-tells-us-about-managing-a-green-grid-238326358