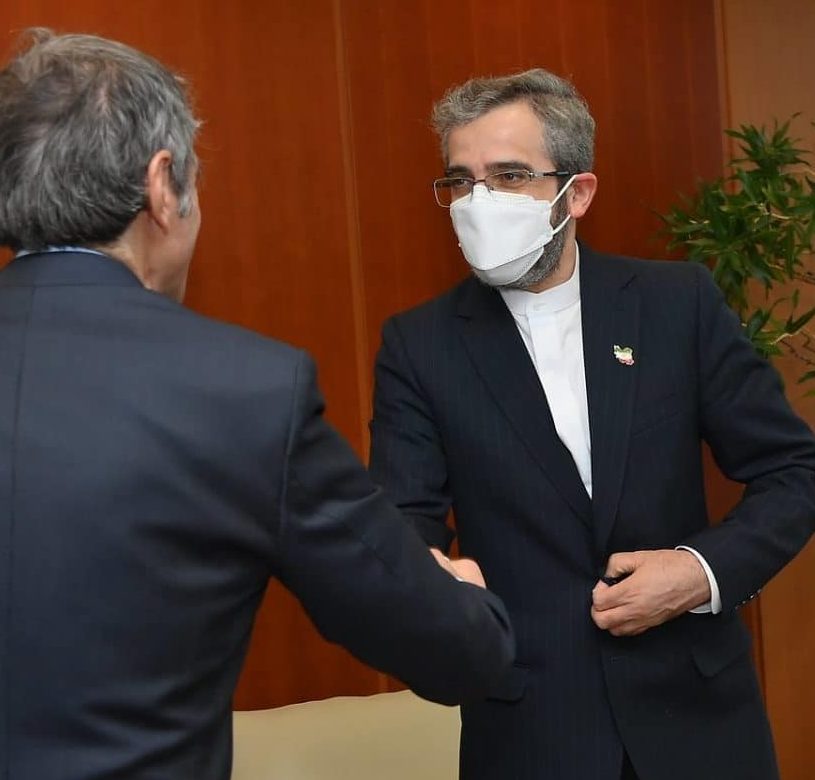 Iran’s nuclear potential can be reduced, but not eliminated

Rafael Mariano Grossi, Director General of the IAEA, welcomes Mr. Ali Bagheri Kani, Deputy Minister for Foreign Affairs of the Islamic Republic of Iran, and his delegation upon their arrival at the Agency’s headquarters in Vienna, Austria. December 2, 2021. Photo credit: Dean Calma / IAEA. (CC BY 2.0)

Iran is today much closer to having the material it needs for a nuclear weapon – perhaps only a few weeks from now if it chose to do so – than it was when President Trump breached the Joint Comprehensive Plan of Action, or even when the deal was first struck. implemented in 2015. The JCPOA was negotiated to implement a one-year gap between any decision by Iran to acquire enough material for a weapon and the ability to produce one. Thanks to the expertise Iran has gained since President Trump breached the accord by reimposing sanctions without cause, it now seems virtually impossible to recreate a one-year breakout timeline. Any new deal will likely have a shorter “breakout period”, but will likely be an improvement over the very short fuse that exists today.

The JCPOA was based on undeniable facts. Iran has known since at least 2003 how to make nuclear weapons, a technology that is more than 70 years old. This has been demonstrated by several reports from the International Atomic Energy Agency. Iran has also known for more than 15 years how to enrich uranium via centrifuges. He was exploiting several thousand as the JCPOA negotiations approached. Both of these things were true even before President Obama, who brokered the JCPOA, came to power. Thus, the JCPOA embodies an essential truth: the only constraint that could block Iran’s path to a nuclear weapon, should it ever choose to build one, was to prevent the Iranian government from having access to nuclear materials of military quality, that is to say highly enriched. uranium. No military grade materials, no weapons. Even with the 300 kilograms of low-enriched material authorized by the deal, Iran would not have enough uranium on hand to build even a single bomb. The one-year breakout timeline was a political decision, based on how long JCPOA members thought it would take to generate an international response to any Iranian weapons-making initiative.

What has been achieved through the JCPOA remains truly remarkable. Iran has voluntarily limited itself to having no more than 300 kilograms of enriched uranium, capped at no more than 3.67% uranium-235. He also agreed to adopt the most intrusive verification provisions ever negotiated in a cooperation agreement. In exchange, Iran was to have access to its own money, which had been frozen for nearly 40 years, and the ability to do business legally in the international market.

All of these valuable provisions were undermined by the former president’s unilateral decision to violate the terms of the JCPOA. Today, instead of 300 kilograms of enriched uranium, Iran has more than 2,000 kilograms, six times the amount allowed in the JCPOA. This is more than enough for several weapons. And instead of being capped at 3.67% enrichment, some of this material has been enriched up to 60% uranium-235. That’s almost two-thirds of the way to weapons-grade purity. Moreover, Iran has gone well beyond the use of its first generation uranium enrichment centrifuges – the IR-1 – and is now gaining valuable experience using the models of IR-2, IR- 4 and IR-6. Iran has also mastered the complicated process of interconnecting these units so that it can power cascades of low-enriched uranium, meaning it can move from low to high levels of enrichment even faster in the future.

President Trump’s decision, authorized by former Secretary of State Mike Pompeo and National Security Advisor John Bolton, to violate the JCPOA and liberate Iran to advance its nuclear program was a political, technical failure. and complete safety. Iran is just as, if not more active in the Middle East than it was under the JCPOA and is now much closer to being able to leverage its nuclear capabilities on regional states. The United States, not Iran, is seen as an unreliable player on the nuclear front, and getting back to a deal took more than a year of effort and counting by President Biden and his negotiation team.

Unfortunately, as a result of President Trump’s actions, there are no good options left, but there is a decent one: that is to negotiate steps to get Iran to agree again to restrictions on the amount of nuclear material. what he can own and what he can do with it. material – if we can. Such restrictions are the subject of ongoing negotiations in Vienna among JCPOA members. But there is a catch. Even if the original JCPOA terms can be reimposed, Iran will have lifted many of the technical hurdles that allowed the original deal to put Iran at least a year away from weapons capability. An inability to recreate a one-year breakout timeline is the price the world must pay for President Trump’s decision to walk away from the carefully negotiated and vetted deal. Any new agreement is therefore likely to have a break-up period of well under a year. As noted above, the good news is that the one-year deadline was a political decision, not a technical one. The escape schedule is an alarm system for states to take action, if needed, to deter or reverse any decision by Iran to go for a bomb. These can be economic, political or even military measures and can be a powerful deterrent to any Iranian interest in going for a bomb.

JCPOA members must decide how long a breakout period they need to be sure they can respond to any Iranian moves to militarize its nuclear complex. These states have tools they can use to try to stop Iran from building a nuclear weapon if a deal fails, but all will be less effective unless a negotiated deal is handed over. in place. And at the end of any agreement, if the United States and its partners and allies believe that Iran is not committed to a purely peaceful agenda, additional sanctions and negotiations may be pursued when the terms of the agreement initial start to expire.

What has the United States learned in recent years? First, the last administration’s decision to violate the Iran deal was counterproductive, undermining both global and regional security. Second, there is no better deal than the 2015 JCPOA to achieve through strong pressure or unilateral action alone. Under President Trump, the United States tested the premise that a better deal could be struck, and it turned out to be a dangerous fantasy. Third, those who opposed the JCPOA or argued that there was a better deal to be had – as well as those who led the United States to violate the 2015 agreement – ​​helped create the heightened nuclear threat that now represents Iran. They are the ones who bear the responsibility for this danger. And as such, their advice – which will be freely and loudly offered if a new deal is negotiated – should be scrutinized, if not outright dismissed. Many of these critics are the same people who opposed a negotiated deal with North Korea in the early 1990s. Their legacy, a fully armed and operationalized nuclear North Korea, is obvious to everyone. No one can want to see a repeat of that with Iran.

The final lesson is that negotiated diplomatic agreements have prevented proliferation in the past, while unilateral measures and military intervention are almost always less effective than these negotiated alternatives. Negotiations and agreements, backed by unified global support, often work. Although not perfect, compared to military action, negotiated solutions look extremely good. There may be no way to fully recreate the benefits of the JCPOA unless Iran agrees to tighter restrictions on the size of its uranium stockpiles, which would likely require additional incentives from from the United States and others. Currently, such restrictions seem unrealistic, but they could be possible in a follow-on agreement, if one were to be negotiated.

The US, Europe and US allies in the Middle East will pay the price for Trump/Pompeo/Bolton failure for years to come. Decisions have consequences, but it’s not too late to prevent a full nuclear-capable Iran, if the United States is prepared to negotiate from a realistic position. It may not be a perfect result; agreements negotiated in the real world rarely are. But by any measure, a negotiated outcome that prevents Iran from building nuclear weapons would be preferable to the status quo.

Unfortunately, no negotiated or imposed outcome can prevent Iran from being a latent nuclear state. Even military invasion and occupation could not achieve this at this stage. The time for hard choices has arrived, and options are now more limited due to the past fantasy of a “best deal” through maximum pressure.

Czech and Slovak companies cooperate for the long-term operation of the plant: Corporate