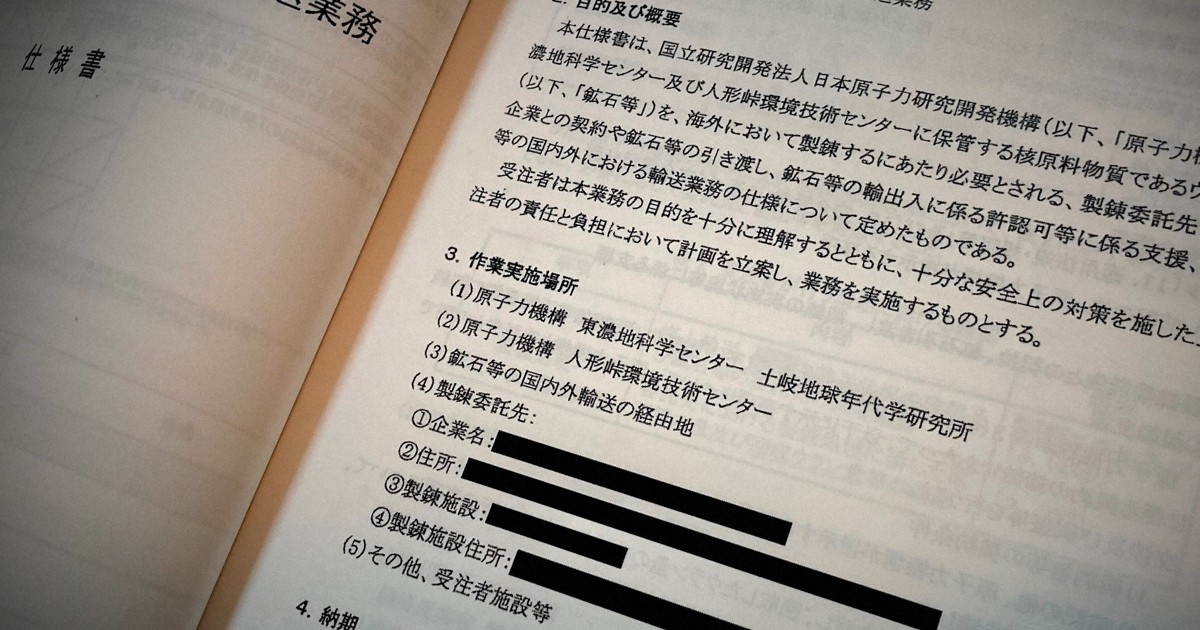 The Japan Atomic Energy Agency (JAEA) plans to export a total of 125 metric tons of nuclear-related materials, including uranium ore collected in Japan and overseas from exploration projects uranium from the organization in Japan, learned the Mainichi Shimbun.

The JAEA will outsource the work of refining uranium ore into fuel for nuclear reactors and will require the contractor to purchase the refined material. This effectively means that the Japanese government-funded research and development agency will take nuclear-related materials that have no use in Japan and dump them overseas.

Materials to be exported include uranium ore and ion exchange resin that has adsorbed uranium. These materials are currently stored at the JAEA’s Ningyo-toge Environmental Engineering Center in Okayama Prefecture and the Tono Geoscience Center in Gifu Prefecture, which controls the Tono mine. Uranium ore had been mined from the Ningyo Pass mining area and imported from overseas for research purposes. The uranium mines in both centers must be closed and the uranium ore must be removed for them to be closed.

Uranium ore is a resource necessary for the operation of nuclear reactors, but Japan does not have a processing plant. At the same time, the material is not meant to be discarded as waste. As some of them emit radiation above permitted levels, Japan would need a legitimate reason to take it out of the country.

As a general rule, nuclear waste must be disposed of where it was created, which means transporting it out of Japan could violate international regulations. Under such circumstances, the idea of ​​commissioning another party to refine the materials emerged.

The JAEA has signed a 170 million yen (about $1.24 million) contract with a subsidiary of Tokyo-based trading house Sojitz Corp. in December 2021 to manage projects, including shipping materials overseas. Transportation is expected to be completed by February 2023. A US firm is considered a likely candidate for the work, but no deal has been finalized.

According to this plan, the uranium ore will be transported to a refinery abroad, the cost of which will be covered by Japan. The refined “uranium concentrate” will then be purchased by the contractor, but since commission costs exceed the selling price, Japan’s costs will likely exceed revenues.

A JAEA official told the Mainichi Shimbun: “We are convinced that we want to dispose of the materials that we have in stock”, admitting that the project is different from a regular commercial transaction in which uranium ore is simply sold as a resource.

Since the JAEA operates on government grants, the cost of this entire process will be funded by taxpayers. A senior official from the Ministry of Education, Culture, Sports, Science and Technology, which oversees the research agency, underscored the legitimacy of the plan, saying: “It’s not that simple than to say: ‘They (nuclear-related materials) have no use at home, so they are waste. Since we don’t have a cheaper or safer way to deal with them, there’s no problem dumping them overseas.”

Hiroaki Koide, who was an associate professor at the former Kyoto University Reactor Research Institute (now the university’s Institute for Integrated Radiation and Nuclear Sciences), said: “After having collected uranium ore only to find there is no way to use it is a typical situation. example of the overly optimistic attitude of those responsible for the administration of nuclear energy. The authorities go ahead with projects based on optimistic forecasts, and when the projects fail, they pay taxpayers’ money to deal with them. He continued: “If there is no use for the uranium ore, it means it is garbage, and officials should follow the rule that nuclear waste should be dealt with where it is. created.