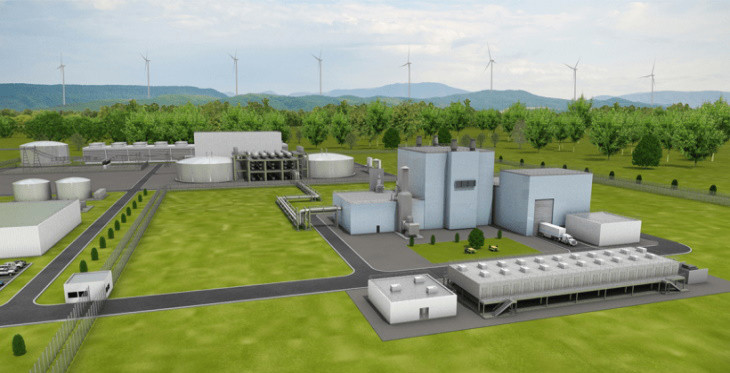 The Wyoming Energy Authority and the University of Wyoming School of Energy Resources presented a recent webinar titled “Advanced Nuclear 101” to provide expert information and answer questions regarding the Natrium nuclear power plant project to be built near Kemmerer.

Dr. Aumeier began with his take on nuclear power in Wyoming.

“We are moving forward in a very different way from what we did 10, if not 20 years ago, with nuclear power,” Aumeier said. â€œWe have been using nuclear power for over 65 years in the United States and the role of the National Laboratories has been to test and validate for the federal government. New advanced reactors are getting smaller, integrated, modular and safer based on decades of research and development at the National Laboratories of the Department of Energy (DOE).

Aumeier explained the different sizes of reactors. Small reactors use molten fluoride or chloride as coolant and on average 1 to 20 mw (megawatts) which is used for base energy, heat and hydrogen product development. There are currently none in the United States. The first to come will be in 2029. Micro-reactors will be used by 2025 to provide electricity in remote locations, for the military, space missions and disaster relief. They take up less than an acre of space.

The mid-sized reactor uses either sodium or liquid lead as refrigerant and an average of 20-300 MW and is used in a mid-sized market area.

Large gas-cooled reactors with an average of 300 to over 1000 MW. He said the large reactor is efficient and matches rapidly growing energy demand. There are currently 95 large reactors in operation in the United States, and most were built between the 1950s and 1980s.

â€œAll of the different reactors have a safety history,â€ Aumeier said. â€œClean nuclear power can transform Wyoming’s economic paradigm. It is a source of energy integrated into advanced industrial production. Micronuclear power leads to the use of steel, new chemical processes, hydrogen for vehicles and industry, electricity, manufacturing, manufacturing and can lead to advanced exports.

Aumeier encouraged residents and officials of Wyoming to engage with university and energy authorities to plan and engage in regulatory oversight for operational excellence, including the creation of a number of jobs; a supply chain, value chain and global market development. The community, Aumeier said, should partner and have short- and long-term plans for the fuel cycle. He encouraged anyone with questions to consider the scientific facts and draw on the 70 years of knowledge acquired by the labs.

The storage of “spent radioactive fuel” from nuclear reactors has raised concerns and questions from some environmental groups, so Dr Jarrell, who manages spent nuclear fuel at Idaho National Laboratories, has covered. all aspects of uranium used in nuclear reactors, from harvesting and enrichment to disposal and storage of â€œspent fuelâ€.

Jarrell explained that there are three types of uranium oxide mining in Wyoming: surface mine, underground mine, and in situ leach mine. In the past five years, none of these mines produced production.

After about five years of use, the fuel is exhausted, can no longer be used and is now radioactive. It is moved to a protected area where it is cooled in swimming pools for three to five years, then moved to dry storage – concrete drums lined with stainless steel. These cans can then be transported in complete safety on a wagon in a structure of more than 100 tonnes containing them.

â€œWe have been transporting these cans for several decades now without any incident,â€ Jarrell said. â€œIt’s a very safe and robust transport system. The United States does not have active storage sites, so cans are currently stored there. We are looking for solutions and our objective is ultimately to move the cartridges to a permanent repository – private or with the DOE. “

There has been an international consensus, Jarrell said, that a deep geological disposal is the answer to the permanent isolation of spent fuel and other long-lived radioactive waste and that several countries in Europe are moving towards it. . He added that advanced reactors have different challenges when it comes to spent fuel management, as their spent fuel comes from different materials. In the future, Jarrell said, there could be the development of a closed reprocessing and recycling fuel cycle, but they would still need a storage and disposal system.

Dr. Allen, professor of nuclear and radiology at the University of Michigan, focused on what Americans value: energy, clean water, sanitation and more. Americans want clean, affordable, resilient and equitable energy, he said.

â€œWe have to reinvent energy,â€ Allen said. â€œIt’s an incredible but complicated transition. We use wind and solar, IT and nuclear. We want emissions reductions, less carbon and particulate matter, and cleaner systems.

Relying on one fuel for power comes with risks, Allen continued, but through the use of transport and dual fuel capacity, the risk is reduced. Jobs and supply chains are important, and the ability to influence international guidelines regarding safety and other regulations is important. There are many values â€‹â€‹and choices that focus on energy, Allen said, and the energy industry and environmental agencies need to work together.

Allen focused on what communities can do to capitalize on the opportunities resulting from the construction of the Natrium advanced nuclear reactor at Kemmerer.

â€œThere is a synergy between the nuclear power plant and the way you use it,â€ Allen said. â€œYou have to think of co-located companies that can use energy to manufacture by-products, such as hydrogen, for example. The possibilities are endless, such as a training center for high-tech jobs, supply chain opportunities, and spin-off and manufacturing technologies.

The webinar ended with responses to questions emailed by listeners. The first questions were about questions and concerns about spent fuel storage and were answered by Dr Jarrell who had previously discussed the options.

Jarrell said: “The community needs to think about where on-site spent fuel will be stored and needs a prior plan.”

Other questions and concerns related to matters which had already been addressed to some extent in the presentations of the three experts regarding: the amount of water that would be used; water pollution; history of environmental impact on low-income populations; economic costs; security; and the construction and operation schedule.

The responses included the fact that the cost of nuclear power for heat and electricity has been shown to be much better than that of any other source; products that can be made from this low-emission energy add another financial benefit; and water pollution from surface mining had been a problem and left a lot of cleanup problems.

A final question concerned the experts’ request for a response to the recent report published by the Union of Concerned Scientists concerning the Natrium nuclear reactor and its proven safety.

The three experts answered in the same way, that the experience on the reactors of swimming pools was very good and that they turned out to be very safe. Regarding the concern about security against terrorist acts, the response has been that non-proliferation must be taken seriously and preparations must be made. They added that the United States has more control over nuclear technology today. They encouraged the auditors to consult all the data and scientific information provided concerning the Natrium reactor.

Jarrell concluded by saying, â€œOur goal for this webinar was to be transparent, to maintain a neutral opinion and to be based on science. “

Aumeier added: “It is important to have an ongoing dialogue about what the community can achieve and what they can do.”