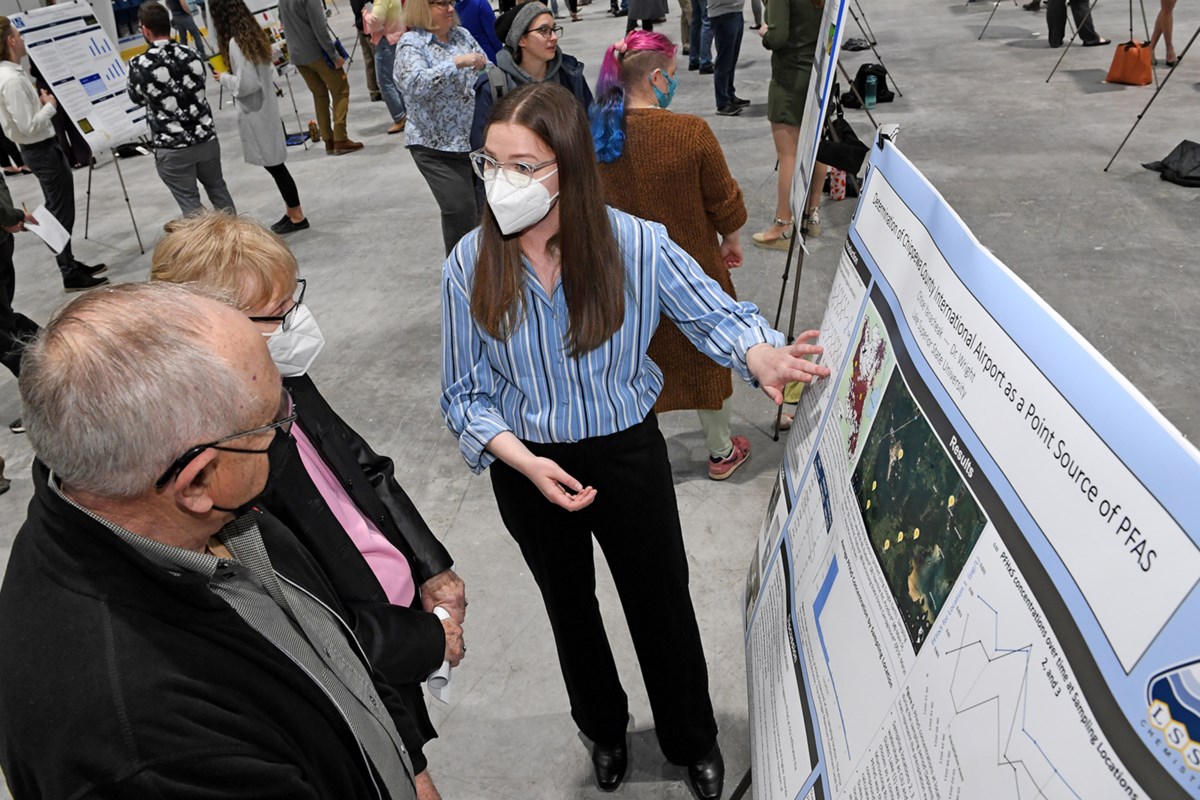 Studies by environmental chemistry students at Lake Superior State University have opened a window into the extent of uranium and an “eternal” chemical compound in the eastern Upper Peninsula.

The PFAS family of compounds – an acronym for polyfluoroalkyl substances – have been a kind of “secret sauce” used in manufacturing since the 1940s. One hundred have been cataloged since their discovery in 1936. Sixteen PFAS compounds have been found useful in everything from cosmetics to camping gear. It gives Teflon slipperiness, imparts heat and water resistance, and has been a boon to firefighting. Six types of PFAS allow foam to spread to smother flames faster after car and plane crashes, especially those containing explosive fuels. Thousands of lives have been saved over the years.

The downside is that PFAS compounds never break down. They flow through water in lakes and wells. And, like the pesticide scare of DDT in the 1960s, scientists have discovered that it accumulates in human tissue and can cause health problems.

In this context, LSSU student Chloe Yanacheak set out to track PFAS compounds carried by streams and runoff from Chippewa County International Airport to Lake Munuscong, 16 km to the east.

PFAS-impregnated foam was used for 20 years when the airport was Kincheloe Air Force Base, and for nearly three decades after the base became a regional airport. PFAS in firefighting has declined since the early 2000s as other substances have developed as replacements.

“The good news is that PFAS levels are virtually non-existent in Lake Munuscong,” she said. “Duke Lake, my sample closest to the airport, has the highest concentration but still well below the state’s suggested mineable levels.”

Yanacheak’s study confirmed how the natural flow of water from the airport carries the chemical to Lake Munuscong, but at surprisingly low levels.

“The state is closely monitoring wells and water sources around the airport,” she added. “Airports and former military bases continue to be hotspots across the country.”

Another LSSU student, Stephanie Owens, designed her study to search for PFAS in areas of the Eastern Upper Peninsula. In addition to sampling near active and old airfields, she expanded sites to include campgrounds at Trout Lake, Sheldrake Dam — near Whitefish Point — and on Big Manistique Lake west of Newberry.

“The concentrations of PFAS in campgrounds surprised me,” she said. “Sampling all summer, I had spikes in August. Dr Derek Wright (Owens project adviser) thinks we might see runoff from tent waterproofing.

Concentrations of campgrounds were even higher than at Kinross Lake, just northwest of the Chippewa County Airport. Owens attributes this to the lake upstream from the airport. As Yanacheak discovered, the water flows south into Lake Munuscong.

“We see measurable concentrations near where activities use PFAS products — airport firefighting and recreational camping,” she said.

In both studies, the concentrations measured were well below levels requiring action, which can range – depending on the type of PFAS compound – from 8 to 96 micrograms per liter of water.

Another eternal substance, this naturally occurring one, uranium, has been found in surprising amounts from samples taken from more than three dozen wells on Sugar Island.

“The uranium seeps in from below because we’re sitting on top of layers of porous sandstone,” said Olivia Ludlow, who analyzed 84 samples. “I expected to see higher amounts of uranium in deeper wells, but not the levels I saw in some shallower wells.”

She and adviser Derek Wright speculate that shallower wells close together can suck uranium in from below at a higher rate, much like people sharing multiple straws in a milkshake.

“Twenty-eight of the 84 samples had uranium levels above the recommended federal limit,” Ludlow said. “Only two high-grade uranium wells were deeper than 107 meters. High grades of uranium appeared in seven wells less than 30 meters deep. This could be due to the way they are grouped.

Wright and Ludlow shared their data with landlords, county health and the state.

“Homeowners should test more often as more wells are drilled nearby,” Ludlow advised. “They should also invest in efficient filtering systems.”