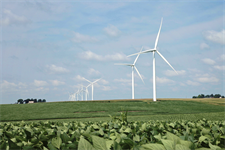 MidAmerican Energy has announced plans for a 2 GW wind farm in the United States as part of proposals for a $3.9 billion renewable energy project that will encompass wind, solar and “other technologies clean energy”.

The Wind Prime renewable energy project is expected to include up to 2,042 MW of wind capacity (2042MW Wind PRIME PRIME wind power (2042MW) DownIowa, USA, North America Click to see full details) and up to 50 MW of solar capacity, according to the company’s filing with the Iowa Utilities Board.

As part of its proposal, the company said it would also conduct feasibility studies of other clean generation technologies, including carbon capture, energy storage and small modular nuclear reactors, to help achieve its transition to net zero emissions.

If approved, the company expects to complete construction of the project by the end of 2024.

It is unclear whether US utility MidAmerican plans to develop Wind Prime in one or more stages or precisely where the project will be built.

MidAmerican serves approximately 1.5 million electric and gas customers in the US Midwest, including Iowa, Illinois and South Dakota. He said he has invested $14 billion in renewable energy projects in Iowa since 2004.

It is not yet clear whether the company plans to finance and develop the wind farm on its own or seek co-investors.

If the proposals are approved, the company estimated it would increase its delivery of renewable energy to its Iowa customers from 88%, currently, to 100%.

He also said that completing the project, “in conjunction with existing non-carbon resources,” would reduce CO2 emissions by 14 million metric tons, to 75% of 2005 levels.

The company estimated that the Wind Prime project would create more than a thousand full-time jobs during the construction phase and another 125 for ongoing operations and maintenance (O&M).

He said the project would also pay an average of $24 million per year in local property taxes for its turbines and solar installations and an additional $21 million, per year, to landowners for the right to build on their land.

Innovative nuclear reactor planned for a small town in Wyoming; The Bill Gates company behind the project

Good news for uranium: nuclear power has record reliability, despite past disasters