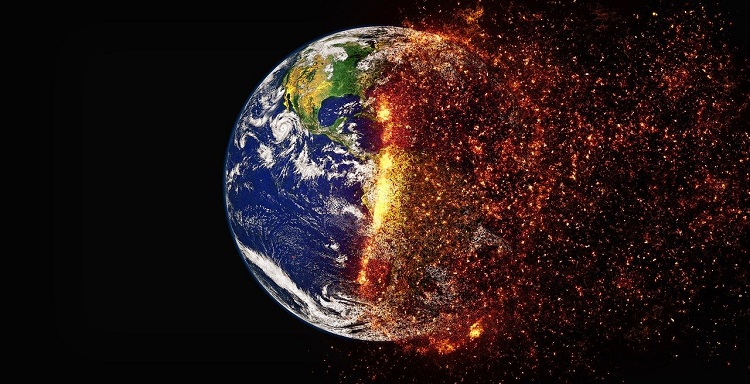 The good news is that finally, after three decades of warnings from the world’s top climate experts, most citizens and leaders understand that climate change is today’s biggest global threat. The global average temperature is rising 10,000 times faster than what can be attributed to the Earth’s natural cycles. Relentlessly, climate change would impact all aspects of life on the planet. But many are still trying to figure out how to best alleviate the problem. Hope this article sheds some light on some issues.

What is the root cause of climate change today?

Before the industrial revolution of the 1800s, a billion people mainly used renewable energy with few harmful emissions. The industrial revolution brought major improvements in the quality of life and life expectancy. As shown below, this has resulted in exponential growth in population, energy use and emissions. Simply put, there are too many people using too much of the wrong stuff. The resulting emissions accumulate in the Earth’s atmosphere and trap heat like a greenhouse.

How big is the problem?

The graph below shows the enormous size of the problem. By 1960, the world’s population had tripled from 1,800, and energy consumption had risen to 3,187 mtoe (million tonnes of oil equivalent) of which 80% came from fossil fuels. Sixty years later, we consume 14,301 Mtoe, 80% still comes from fossil fuels and emissions have reached 33,143 billion tonnes per year.

An energy revolution is essential. Fossil fuels have been the mainstay of the world’s energy supply for 100 years. But these are finite resources.

We now understand that we need to aggressively transition to clean energy to achieve net zero emissions by 2050. And we need to switch to new energy before we run out of old finite energy. Cutting off fossil fuels before they can be replaced would create an energy shortage with a disproportionate impact on the most vulnerable people in each country.

As the graph shows, we need to both deploy technologies. Battery-electric vehicles reduce the energy consumption of cars and light trucks by 70%. Heat pumps and cogeneration of electricity and heat will reduce energy consumption for heating by 30%. We are unlikely to be able to completely replace oil and gas by 2050, so as the graph shows, we need to offset emissions from the remaining 10% of oil and gas consumption by capturing their emissions and removing them. transforming carbon neutral liquid materials and fuels for airplanes into useful products such as carbon fiber. Canada will be one of only five countries able to supply the remaining 10% of oil and gas.

What are the advantages and disadvantages of betting on renewable energies?

The hydroelectric and geothermal potential is limited by geography. Every year there are advancements in wind and solar power, but fundamental limitations remain. Solar energy production is equivalent to 10 hours a day in June in Madrid, but only one hour a day in December in Toronto or Berlin. In Canada, wind power production is three times higher in January than in June. Wind and solar have gotten cheap when they can be used when producing at full capacity (for example to meet midday peak demand or to make clean hydrogen), but they are getting expensive. when their production must be stored. or saved up to 85% of the time. Some experts predict that the massive recycling costs of solar panels and wind turbine blades will double or triple the discounted cost of living of wind and solar power.

The use of the decrease in agricultural land near densely populated areas is a major limitation. While some people oppose Ontario’s proposed 2,000-acre short bypass of Highway 413, they haven’t done the math to understand the amounts of land required for various clean energy sources.

Small 225 MWh modular reactor by Westinghouse on 15 acres of land supplying a city of 225,000 homes.

Wind and solar power might one day be sufficient in a few areas with strong sunshine and wind, but it is highly unlikely that wind, solar, hydropower and geothermal power alone could replace fossil fuels over the years. Next 30 years.

What are the advantages and disadvantages of nuclear energy?

Each source of clean energy has its advantages, disadvantages and risks, but we will need all we can get out of it. We will learn a lot by 2030.

We need to install every ‘practical’ megawatt of hydropower, geothermal, wind and solar power by 2050. But after 20 years of Germany’s valiant efforts to replace nuclear power with wind and solar, fuels fossils still represent 77% of their energy supply. . The International Energy Agency warns Spain to avoid following this path, even though solar is 50% more productive in Spain than in Germany or Canada. Real-world evidence tells us that it is highly unlikely that wind, solar and hydropower alone could allow us to achieve net zero emissions by 2050.

Evidence also tells us that after 2030, advanced small modular nuclear reactors will be the safety net to fill the inevitable gaps, provided the risks of using more nuclear power remain lower than the risks of missing targets. emissions and climate.

Register now here to receive our summary by email with links to our most recent stories.
Local news delivered to your inbox three times a week!

Iran begins to enrich 20% uranium; The United States and Europe condemn this decision