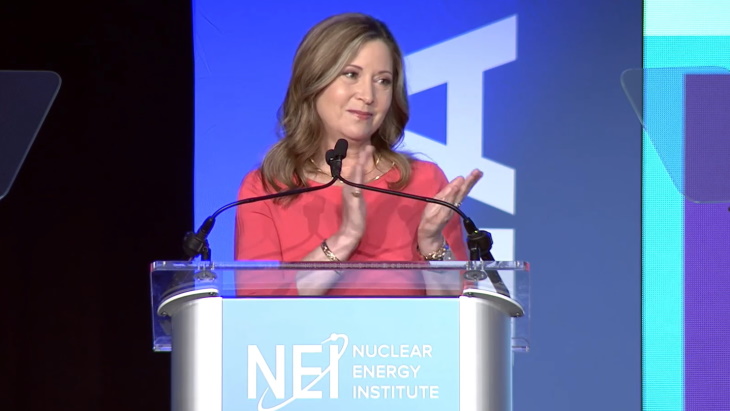 NEI’s Maria Korsnick paints a picture of ‘radical change’ for nuclear: Energy and the environment

A low-carbon future – anchored by the strength and resilience of today’s nuclear fleet – is within reach if we make the right choices today, says the President and CEO of the Nuclear Energy Institute (NEI) , Maria Korsnick, in her annual State of the Industry Address. to the American organization Nuclear Energy Assembly in Washington DC.

Korsnick’s speech was broadcast live from the Nuclear Energy Assembly.

Korsnick outlined policy priorities for the U.S. nuclear industry, provided perspective on the future of nuclear, and explained how the industry is critical to advancing climate goals, workforce, energy markets energy and global partnerships.

The climate crisis is no longer a “vague, theoretical discussion”, and leaders in the United States and elsewhere have now recognized that the response to this climate crisis is intrinsically linked to the power grid, the economy and energy security. , she said, with strong corporate commitments and policy goals now in place to reduce carbon emissions using all clean energy sources available to us. But achieving “true deep decarbonization” will require more than “tinkering around the edges”.

Over the past year, she said, she has seen a “radical shift” in the perception of nuclear power, which has gradually been recognized as a tool to reduce emissions with bipartisan political support for all levels of the American political system. Under the bipartisan Infrastructure Act, $6 billion has been allocated to support the continued operation of existing US nuclear power plants under threat of closure, $2.5 billion for demonstrations of advanced reactors before the end of the current decade and a large-scale demonstration of carbon-free hydrogen production using nuclear power is needed, she noted.

Support is also operated at the state level. “Ten years ago, we would have been lucky enough to see even a dozen pro-nuclear bills pass through state legislatures,” she said. “In recent years, we’ve seen ten times as many actions in states and over 100 bills supporting nuclear.”

This federal and state momentum is a testament to the value of the existing fleet and advancements in next-generation technology. Next-generation reactors will pair “perfectly” with sources like wind and solar, but recent studies have shown that while nuclear has the potential to supply more than 40% of US electricity by 2050 , a system that relies on wind and solar to “do the heavy lifting” would be prohibitively expensive.

“The bottom line is clear: nuclear is the critical component that really makes full decarbonization affordable while maintaining the reliability of our grid,” she said.

The versatility of new reactor designs opens up new possibilities for carbon-free energy service at any scale, Korsnick said, from the advanced designs of large reactors being considered by countries like Poland to replace coal-fired power plants, to the microreactors which are “an excellent choice”. ” for remote areas like Alaska and northern Canada.

The US nuclear industry currently employs some 100,000 people directly, with the supply chain indirectly employing four times as many, she said. “As we build the reactors of tomorrow, we will activate even more segments of the American workforce,” she added. Advanced nuclear reactors will be “local economic engines” providing secure and quality jobs, while the siting of small modular reactors to replace end-of-life coal-fired power plants will make it possible to use existing transmission infrastructure, while that approximately 75% of the current coal-fired workforce should be able to transition to jobs at the nuclear plant.

Everyone on the bridge

The decarbonization potential of nuclear energy goes beyond the electric grid, which has brought potential new customers to nuclear as the oil, gas and chemical industries in the United States and elsewhere turn to nuclear to decarbonize their supply chains, she said. In the longer term, nuclear will play a role in hydrogen production for the manufacturing and transport sectors, while new technologies will provide high-temperature heat to decarbonize heavy industry.

There is an “unprecedented opportunity” for the United States to rebuild its influence in the global supply chain, she said. Events in Ukraine have underscored the link between energy security and national security, and the NEI is working alongside U.S. policymakers to establish a safe and reliable supply of uranium that will eliminate the need for Russian imports, she said. . While such a decision is simple to make, “it won’t be easy to execute — and it can’t be done overnight,” she said.


“At this point, our challenge is not a lack of demand – it’s being able to build fast enough to meet the demand ahead of us,” Korsnick said, citing an NEI survey of nuclear managers from nuclear power plants. US facilities which together expect to add 90 GW of nuclear power to the US grid, most of which will come online by 2050 – translating into “about 300 new small modular reactors over the next next 25 years”.

This will bring challenges for US regulators – who will need a more efficient process to review and approve licenses for new designs – and funding. “The global opportunity is huge. By one estimate, U.S. business revenues alone could account for as much as $1.9 trillion in exports over the next 30 years. That’s a value we can’t not allow us to miss,” she said.

“If we don’t commit to the next generation of nuclear now, our hesitation will cost our power grid, our economy and our environment. The train leaves the station.

Water crisis: a new ‘floating’ station could be the key to unlimited drinking water | Science | New