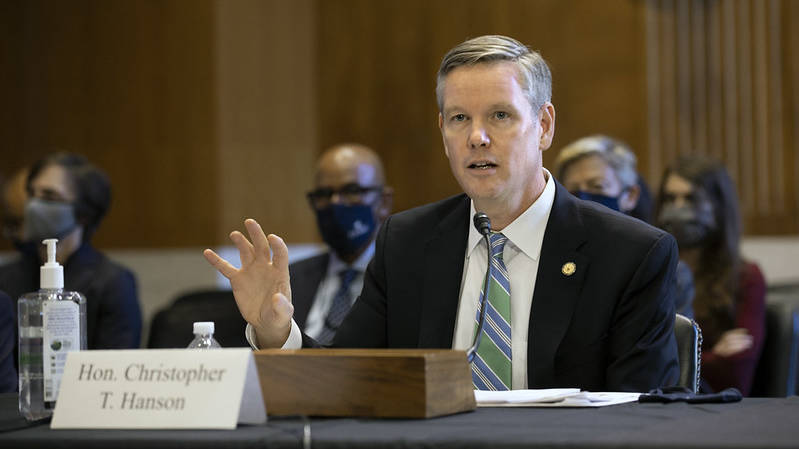 The chairman of the United States Nuclear Regulatory Commission said he was intrigued by the type of small nuclear power plant the military wants to install at Eielson Air Force Base near Fairbanks.

â€œThe safety devices they haveâ€¦ (are) kind of passive safety devices, aren’t they? President Christopher Hanson said during a hearing in the US Senate last week. “It doesn’t have that many moving parts, so there isn’t that many things to break or pay attention to.”

The Air Force announced in October that it had chosen Eielson for a one-of-a-kind mini-reactor. It would provide about half of the electricity the base needs. Eielson now relies primarily on a 70-year-old coal-fired power plant.

Hanson said the Nuclear Regulatory Commission was considering several concepts of micro-reactors and an application for a license.

He told U.S. Senator Dan Sullivan that the technology could be a boon to remote areas because they don’t need new fuel every year or two, like large standard reactors do.

â€œSome of these micro-reactors don’t need to be refueled for 10 or even 20 years, depending on the fuel formulation,â€ Hanson said. â€œSo this has the potential, as you point out, to reduce the cost of the energy supplied. Which, of course, is, I know, of great concern to the Alaskans. “

According to the US Department of Energy, most microreactor designs rely on highly concentrated uranium 235.

Massive radioactive disasters in the Soviet Union and Japan tarnished the reputation of nuclear power, which many Americans never trusted. Despite concerns about radioactive waste and pollution, some advocates say nuclear power is a solution to climate change.

The Air Force hopes to have a micro-reactor in operation at Eielson by the end of 2027. It would be cleared by the Nuclear Regulatory Commission and be owned by a commercial company.