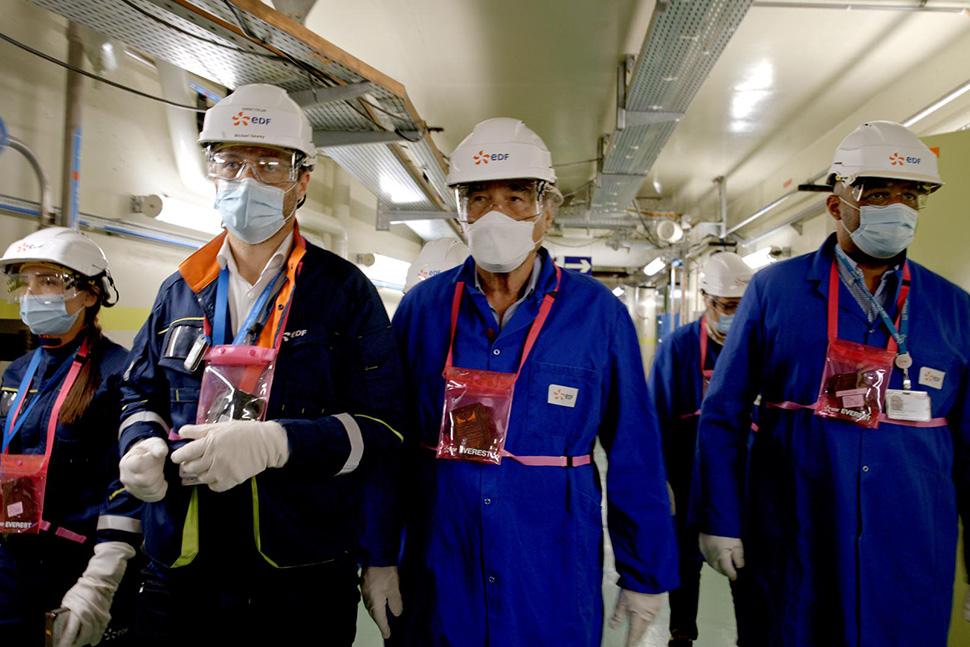 In “Nuclear,” his intensely compelling and unmissable documentary, Oliver Stone presents the vital and historic case that nuclear energy has fallen victim to a perception/reality conundrum, which is now being turned on its head. The perception is that nuclear energy is dangerous: too dangerous to be an essential component of our energy needs. The reality, Stone argues, is that nuclear energy is clean, plentiful and safe. “Nuclear” says the disturbing reality of our energy crisis – the impending catastrophe of climate change, the hopeful but stubbornly incremental growth of renewables like wind and solar – is too urgent for nuclear power not be an essential element in meeting our energy needs.

These are the two sides of the debate, and they’ve been entrenched for so long that it’s hard, at a glance, to see much scope for change. But that’s where a documentary like “Nuclear” comes in. I think the film, seen with open eyes, could influence people’s ideas on the issue of nuclear energy in the same way as “An Inconvenient Truth” focused on climate change.

For decades there has been a primal fear of anything associated with the word nuclear. The anti-nuclear energy protest movements that took root in the late 1970s and early 1980s lumped all “nuclear” into one bucket: nuclear weapons and nuclear power. That was all…wrong. This is why left-wing activist types, in the No Nukes era, made a fetish cult of the mispronunciation of the word “nuclear” as “nuke-ular”. They said, in essence: the possibility of being naked is inherent in this technology. It should therefore be treated as poisonous.

If you argue against this idea, as Stone does, then those who believe it will repeat the following as if it were an obvious mantra: “Sure? You are crazy. Six words: Three Mile Island. Chernobyl. Fukushima. Done.” The fear of nuclear catastrophe is a primordial fear that is seen by anti-nuclear ideology as a transcendental deal breaker. There is no possibility of having a rational dialogue about it , because the pro-nuclear position is treated, by the anti-nuclear position, as if it were, in fact, the pro-nuclear position-disaster position.

What few will say out loud is that the fear of nuclear catastrophe has for decades been elevated to myth. No one, for example, died in the Three Mile Island crash (but the serendipitous release of the 1979 disaster film “The China Syndrome” helped entrench the perception that people died). There is inherent risk in everything, but the new generation of nuclear reactors have built-in structural safeguards that leapfrog those that were in place at Three Mile Island, Chernobyl or Fukushima.

And for anyone tempted to view this argument as an extreme form of wish fulfillment, Stone invites you to discover the forces that agree with him. Namely: huge sectors of the rest of the world. Once out of the United States, nuclear power has a very different picture. It has been used, for decades, to fuel the economy of such an enlightened Euro-socialist nation as France, which now derives 70% of its energy from nuclear. (Each French citizen, on average, produces a third of the carbon emissions of each citizen of the United States.) And things can change even in the United States. The anti-nuclear stance was, for years, a shibboleth of liberal progressives, but 60% of Americans now say they support nuclear power. (To date, 20% of American energy is generated by nuclear.)

The case for nuclear energy, as a force that could lift us out of our calamitous addiction to fossil fuels, has already been presented in a film. Ten years ago, the great documentary filmmaker Robert Stone (“Chasing the Moon”, “Oswald’s Ghost”) – unrelated to Oliver – made “Pandora’s Promise”, which presented an even more immediate version of Oliver Stone’s case. : that nuclear energy has been unfairly demonized, and that more and more environmentalists believe it is destined to be our savior if we are to save ourselves from the slow-burning entropy of climate change. “Pandora’s Promise” premiered at the Sundance Film Festival in 2013, and I’ll never forget the conversations I had about it. I would say what an important movie I thought it was, and the answer, inevitably, would be, “But it only shows one side!” I thought: Really? This is your objection? We heard the case versus nuclear energy for 30 years. Now here’s a documentary that took 87 minutes to present the case for nuclear energy. It just seemed like no one wanted to listen.

The same may be happening with Stone’s ‘Nuclear,’ which got a mixed reaction when it premiered a month ago at the Venice Film Festival and is still looking for a distributor. . Yet Stone, who based the film on the book “A Bright Future,” by Joshua S. Goldstein and Staffan A. Qvist (the narration, read by Stone, was written by Stone and Goldstein), colors the historical settings of nuclear energy in a way that I defy you not to find revealing.

Stone speaks of the nuclear bomb, “the original sin of Hiroshima and Nagasaki”, which has become, he says, “a collective trauma”. (We see the infamous images of duck-and-shelter public schools.) As he explains, “I, too, once believed that environmentalists were right and that nuclear power was dangerous. We were, in our own way, terribly ill-educated, unwittingly crossing nuclear war with nuclear energy.

It has not always been so. In the 1950s, President Dwight D. Eisenhower planned to use nuclear energy to generate massive amounts of electricity, and he jubilantly shared his vision with the United Nations in 1953. Eisenhower launched the Atoms for Peace program and ordered the visionary US Navy Admiral Hyman Rickover. , which first developed the idea of ​​nuclear propulsion for submarines, to embark on a land-based nuclear power plant. (It was built in 1958.) The future would be all electric! From the 1960s to the 1980s, 100 large reactors were built in the United States. France opened its first nuclear reactor in 1964 and, from 1975 to 1990, built 56 reactors. Sweden and Canada have also been part of the movement, as these countries have taken giant steps towards moving away from coal. For a long time, nuclear energy has been allied with the environmental movement and supported by institutions like the Sierra Club.

But the big oil companies, nicknamed the Seven Sisters, were ready to tackle nuclear power. “Nuclear” presents evidence that the Rockefeller family, the magnate barons of Standard Oil, spread the misconception that even the lowest levels of radiation are harmful to human health. Stone says that’s an argument we viscerally agreed with. He calls it a “contamination phobia”, saying: “After all, we evolved on a planet filled with uranium and bombarded by both sunlight and cosmic rays. Our bodies are built by nature and evolution to handle small amounts of radiation.

Yet this is not the perception. The perception is that nuclear energy is dangerous because uranium, the material at its base (pun intended), is inherently dangerous. If you want to talk about strange bedfellows, consider this: American oil companies in the 1960s and 1970s became de facto partners in the anti-nuclear movement, allying themselves with “greenies” to help kill the key. source of energy that could compete with fossil fuels.

But today, Stone suggests, for perhaps the first time since the 1950s, we can actually start having the discussion, because there’s a new factor at work in the area where nuclear power is dangerous. and therefore STFU. This factor, in simple terms, is:

You want to talk about insecurity? Fossil fuels are dangerous. Not just the way they’ve always been (they create pollution, which is bad for you), but the relatively new way mainstream culture has come to view them: as drivers of climate change, the mother of all dangers energy trends. It’s killing the planet. It is to stifle the possibilities of the future.

It is, on balance, far more dangerous than nuclear energy.

A connected idea: Our global need for electricity will multiply in the decades to come. It’s because three-quarters of the world’s population, who we tend to think of as “poor,” live in developing countries, and they’re going to want air conditioners, computers, and all the other goodies of the developed world. How do we meet this growing demand for electricity without an even more catastrophic increase in carbon emissions? By ramping up the wind turbines?

No one except oil company executives and their Republican facilitators in Congress is against renewables. Oliver Stone is definitely not. Wind and solar power will occupy an important place in the future. But again, we hit a wall of perception/reality. The perception, dating back to the No Nukes era, is that renewable energy, which is now a major growth industry, is a wonderful organic way to create energy to replace the dirty dangers of coal. Which sounds fantastic. The reality is that renewables, even given the growth curve they’re on, won’t be able to produce nearly all the electricity our world needs for many, many decades. We can’t rely on them to fill the void.

Stone points out that middle-class culture has become a matter of personal virtue in terms of reducing one’s carbon footprint: recycling, electric cars, using more environmentally friendly consumer products, all tied together by the wish that these things add up. and make… the difference. But they won’t. That they do is actually something of a progressive fantasy (you could say it’s a feel-good tic of consumer culture). It’s not that the ramp-up of, say, electric cars won’t have an impact; Of course. It’s not enough to stem the tide of climate change.

Over the past decade, Oliver Stone has made documentaries I’ve had mixed feelings about, like his exploratory yet overly soft portrayals of Vladimir Putin and Fidel Castro, or his recent conspiratorial escapade “JFK Revisited: Through the Looking Glass “. I’ve been, at key times, a Stone supporter (I think ‘Natural Born Killers’ and ‘Nixon’ are two of America’s greatest movies), but I’m no conspiracy theorist. I think Lee Harvey Oswald acted alone, killing JFK with three shots from the Texas Book Depository. But “Nuclear,” which is imbued with Stone’s intelligence and quest for truth, comes from somewhere other than the feverish, dreamlike polemical sphere that has often been associated with this filmmaker. His case for nuclear energy is sober, grounded, journalistic. But don’t take my word for it. If and when “Nuclear” lands a distributor, seek out the film. It demands and deserves to be seen.

Czech Republic to ban visas for some Russians