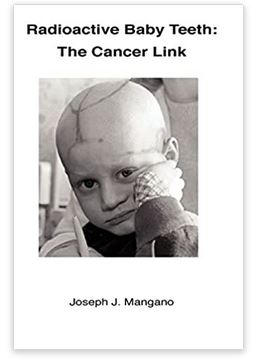 Nuclear Shutdown News chronicles the decline and fall of the nuclear industry in the United States and beyond, and highlights the efforts of those working to create a nuclear-free world.

Fear of nuclear annihilation after WWII has spread around the world as has the fallout from nuclear bomb testing. Scientists have started to document the presence of this radioactivity in humans.

One particular radioactive chemical, strontium 90 (Sr-90), has received special attention. Like other fallout, it does not exist in nature. Like its non-radioactive cousin calcium, if it enters our body, it concentrates in our bones and teeth, and can emit radiation there for about 200 years, potentially causing cancer and other serious diseases.

In the 1950s and 1960s, the consumption of milk was strongly encouraged, especially among children. Reports of Sr-90 in milk began to appear.

In 1961, shortly after President Kennedy took office, Mother’s Strike for Peace was formed to promote a worldwide ban on nuclear tests. The movement quickly went global.

Around the same time, activists and scientists from various parts of the world developed the idea of â€‹â€‹collecting baby teeth and testing them for the presence of strontium-90. In the United States, these efforts have focused around St. Louis, with parents donating their children’s teeth for testing at the University of Washington.

The results were disturbing, indicating that the more fallout accumulated in the environment, the more Sr-90 appeared in children’s teeth. The published results of these studies were shared with Kennedy’s scientific adviser Jerome Weisner. Wiesner in turn described Kennedy’s reaction as he relayed the news as the President stared out of the White House window on a rainy day: the earth from the rain, and he said, looking out the window. : ‘You mean it’s raining over there?’ – and I said ‘Yes’; and he looked out the window, looked very sad and didn’t say a word for several minutes.

Shortly after, Kennedy obtained the test ban treaty accepted by the United States, the USSR and the United Kingdom.

“The number of children and grandchildren with bone cancer, leukemia in the blood or poison in the lungs may seem statistically low to some, but it is not a natural hazard to the disease. health and it is not a statistical problem. The loss of a human life or the deformation of a single baby – which can be born long after we are gone – should be of concern to us all. Our children and grandchildren are not just statistics to which we can be indifferent. “

Beginning in the 1950s, the US federal government’s â€œAtoms For Peaceâ€ program encouraged and heavily subsidized the proliferation of commercial nuclear power plants to generate electricity for the general public. This electricity would be “too cheap to be measured,” people were promised. This was only the first of many promises that turned out to be false. Another was that the fallout released by the plants would be negligible. But as the words The Mile Island, Chernobyl, and Fukushima entered our vocabulary, another image entered our mind, and it looked like a mushroom cloud.

It turned out that all these nuclear power plants must regularly release radioactivity into the environment, of the same nature as nuclear weapons. And including Strontium 90.

So, once again, the radioactive baby teeth returned to the scene.

This accelerated in 2001 when workers at Washington U. in St. Louis found a previously unknown number of untested baby teeth – it turned out to be 100,000!

These ended up with the Radiation and Public Health Project (RPHP) which had previously conducted studies with other baby teeth collected within 50 miles of US nuclear power plants that indicated worrying levels of SR-90, as well. than an unusually high number of childhood cancers.

â€œRPHP was the first to examine health risks using the results of a study on baby teeth, and it focused on childhood cancer, the disease most likely to present with such risk. The group found a statistical link between Sr-90 teeth and cancer diagnosed in children under ten near three nuclear power plants in New Jersey and New York. The group demonstrated that when Sr-90 levels rise near a reactor, childhood cancer increases many years later. and when the levels went down, childhood cancer went down.

Earlier this month, Joe Mangano told me, â€œThe real heroes of this story are the parents of the children who have donated their teeth to their children and in doing so have saved millions of lives.

More recently, the RPHP has partnered with the Harvard School of Public Health to expand the reach of baby teeth studies, archive more financial resources, and bring more media attention to their efforts.