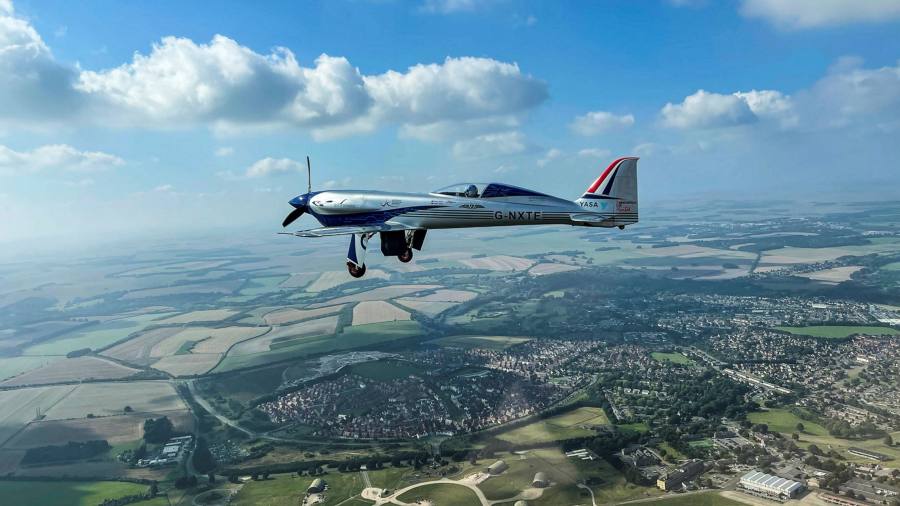 On a bright September afternoon, a small blue and silver plane took off from Boscombe Down, the military airfield near Stonehenge which was the site of many famous inaugural flights.

This was no exception – the single-seater was powered by electricity and carried the hopes of its developer, Rolls-Royce, of eventually bringing a battery-powered aircraft to market.

With 6,000 battery cells and three engines delivering over 500 horsepower, Spirit of Innovation (pictured above) will soon be aiming for a world air speed record for electric aircraft. But it’s not just about chasing records; the aircraft is the most eye-catching example of FTSE 100’s focus on developing technological breakthroughs that could transform commercial aviation.

The program echoes one of the company’s most famous episodes, when Rolls-Royce developed the Type R engine. It powered airspeed racers in the 1930s and was the forerunner of the Merlin engine used in the aircraft. Spitfire fighter aircraft during WWII.

Spirit of Innovation is a “blend of history, inspiring young people, showing that electric flight is real and paving the way for a set of products that will make electric flight a reality,” said Paul Stein, chief technology officer of Rolls Royce.

Like other aerospace companies, the aircraft engine group must navigate the world’s transition to net zero. Warren East, Managing Director of Rolls-Royce, has pledged that all commercial engines in production will be able to run on 100% sustainable aviation fuel by 2023. The company has announced it will achieve net zero emissions by 2050.

There’s a lot at stake. Rolls-Royce is barely emerging from the depths of the coronavirus pandemic. The collapse of long-haul air travel has brought large planes that use the company’s engines to the ground, slashing revenue. Before the crisis, around half of Rolls-Royce’s underlying Â£ 15.4 billion in annual revenue came from its civilian aerospace division. Investors, including Causeway Capital Management, are closely monitoring how the company is handling the transition.

The pressure to reduce emissions has only increased since the crisis and aerospace companies are working on several different technologies. One of the challenges for the industry, according to Nick Cunningham, analyst at Agency Partners in London, is that, as of now, “no one knows” how big the changes will be.

â€œIt’s a bit like cars in the early 1900s or the switch to jets in the 1940s. We are on the cusp of technological change, but the different alternatives are so drastically different that it’s hard to tell. guess a winner, â€he says.

Rolls-Royce, he adds, is “very good at aerodynamics and combustion, but combustion is the problem, so finding your place in the new world will not be easy.”

Company executives argue that despite the damage caused by the pandemic, the group is well positioned to turn the decarbonization challenge into a business opportunity. Its interests in electric planes, sustainable aviation fuels, mini nuclear reactors and management of power systems mean it is more than just a manufacturer of gas turbines that burn fossil fuels, say executives .

To meet its climate goals, the company plans to focus 75% of its research and development spending on low-carbon, net-zero technologies by 2025, up from around 50% today. It typically spends over Â£ 1 billion a year on R&D, although that figure declined in 2020 during the pandemic.

The company estimates that for short-haul flights, between 100 and 300 miles, battery power will allow the transport of four to 19 passengers, depending on the configuration of the aircraft. The company has partnered with air taxi company Vertical Aerospace and is working with Norwegian regional airline Wideroe to develop an all-electric passenger plane.

Rolls-Royce is working on a range of technologies, including turbo-electric and hydrogen, to cater for the mid-size market segment between long and short range. The lessons Stein and his engineers learn from the process will be applied across the group, including the work of the Rolls-Royce defense firm to develop a propulsion system for the next-generation British Tempest fighter jet. .

To make its bet on SAF a reality, Rolls-Royce is joining forces with other companies, including the oil major Shell. Among the challenges are the shortage of sustainable fuels and their cost – they are up to five times more expensive than current jet fuel, although executives believe it should be possible to reduce that cost to twice the cost in a decade. . Rolls-Royce estimates that the aviation industry will need 500 million tonnes of fuel per year by 2050.

Stein is optimistic that, despite the scale of the challenge, the need “will create enormous amounts of innovation,” adding that “there is a danger of taking a 2021 lens to see where technology can take us. “.

One of the most exciting areas for the group is its investment in Small Modular Reactors (SMR), which could, if successful, provide it with a significant new source of revenue and reduce its exposure to commercial aerospace. Rolls-Royce is leading a consortium, which also includes engineering groups Jacobs and Laing O’Rourke, which hopes to be the first mini-reactor developer to submit its design to the UK’s nuclear regulatory review. Boris Johnson, British Prime Minister, backed SMRs as part of his 10-point plan for a “green industrial revolution” last year. The hope is that they will lower the cost of nuclear power and help the UK meet its goal of net zero emissions by 2050.

For the next 40 or 50 years, for long-haul aviation, we are looking for very efficient gas turbines.

Rolls-Royce, which has been working on SMRs since 2015, expects a significant market for its reactors, with 470 MW plants costing Â£ 2.2 billion, falling to Â£ 1.8bn for subsequent units. If successful, they could help power large-scale data centers and provide grid-based power.

The company also plans to use the energy from these small reactors to help make sustainable aviation fuels by the mid-2030s. Its engineers have also partnered with the British Space Agency to study how the energy from micronuclear reactors could be used in space.

However, not everyone is convinced that mini-reactors will become a commercial reality. Critics point out that there are few, if any, operating in the world. Environmental activists also point to the problem that nuclear power leaves behind a legacy of waste. Whatever technical challenges are involved, there will come a time for Rolls-Royce when the company will have to persuade investors that it can make money from its push into small-scale nuclear and electric theft. He has promised to provide financial details on the potential scale of the companies as well as its annual results early next year. It will also give the market a clearer picture of the health of its toll after the pandemic.

Some investors also remain convinced that Rolls-Royce’s electrical systems business is at the heart of the group and is indeed becoming a more evenly distributed business. But Stein is adamant: â€œRolls-Royce is gradually becoming a more balanced company between land and sea electricity production and aviation. We are an electric propulsion company.