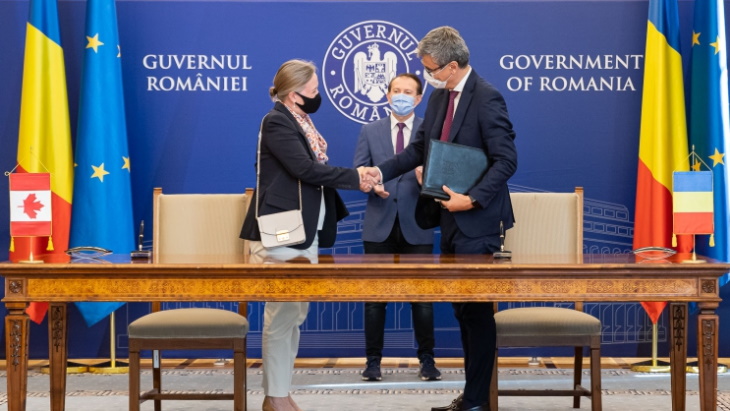 Romania and Canada have agreed to strengthen their cooperation in the field of nuclear energy as part of a key step towards the completion, renovation and possible expansion of the Cernavoda nuclear power plant. The signing of a Memorandum of Understanding (MoU) in Bucharest yesterday follows similar agreements with the United States and France.

“I am happy that in our modernization and construction project of new nuclear reactors, in addition to the partners of the USA and France, we are joined by the Canadian partners, with whom we have a very good and long collaboration in this field. , “Romanian Minister of Mineral Resources Virgin Popescu said. He signed the Memorandum of Understanding with Canadian Ambassador to Romania Annick Goulet, who replaced Seamus O’Regan, Minister of Natural Resources. Goulet said : “Nuclear cooperation has been a pillar of the 55-year relationship between Canada and Romania.

Romania has long wanted to complete two additional Candu units at the Cernavoda plant, and also plans to renovate the two operational Candus there for a longer lifespan. Since January 2020, it has assembled an international team to complete the work, and the text of the memorandum of understanding with Canada includes an explicit provision to set up multilateral discussions between several governments jointly implementing the work at Cernavoda.

Romanian Prime Minister Florin Cîțu attended the signing. “Investments are vital,” he said, “and I am pleased that Canadian partners are joining American partners in developing the nuclear field in our country. Romania signed cooperation agreements with the United States and with France in October 2020.

“I wanted to be present at this event to show that I support the development of nuclear energy projects in Cernavoda and those of the civil nuclear energy sector in Romania,” added Cîțu.

Cernavoda is the only nuclear power plant in Romania. It has two operational Candu-6 units that supply up to 20% of the country’s electricity. In addition to the completion of Units 3 and 4, Nuclearelectrica is working with Candu Energy, which is part of the Canadian group SNL-Lavalin, to extend the operational life of Unit 1 until 2026, when it will undergo a complete renovation. Similar work has been done or is underway in several Canadian Candu units.

More nuclear power is not needed. So why do governments keep praising it?