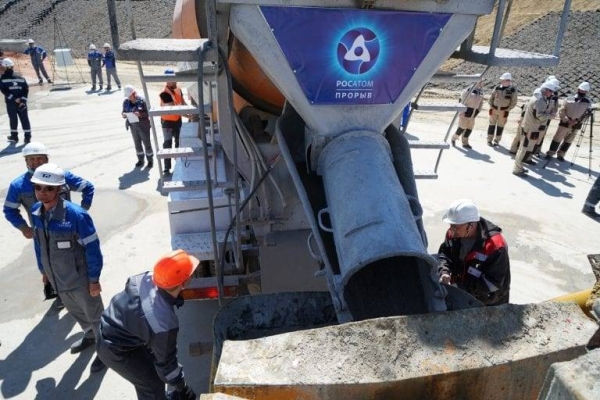 SEVERSK, Russia – Construction of a 300 MW nuclear power plant equipped with the innovative lead-cooled BREST-OD-300 fast reactor has started at the site of Siberian Chemical Combine (a subsidiary company of Rosatom TVEL Fuel Company) in Seversk, region Russian from Tomsk. (South-West Siberia). The reactor will operate with mixed uranium-plutonium nitride fuel (MNUP fuel), specially developed for this installation (it is considered the optimal solution for fast neutron reactors).

The plant will be an integral part of the Pilot Demonstration Energy Complex (PDEC) – a group of three unique interconnected facilities, including the nuclear fuel production plant (for fabrication and remanufacturing), the BREST-OD power unit -300, and the spent fuel reprocessing facility. For the first time in history, a nuclear power plant powered by a fast reactor will be built alongside closed fuel cycle maintenance companies on a single site.

After reprocessing, the spent fuel from the reactor will be sent for remanufacturing (ie reproduction in new fuel), thus giving this system the means to gradually become practically autonomous and independent of the contributions of external resources. The PDEC is being built as part of Rosatom’s â€œBreakthroughâ€ project, aimed at developing the new technological platform for the nuclear industry.

â€œThe nuclear power industry’s resource base will become virtually inexhaustible through the endless reprocessing of nuclear fuel. At the same time, future generations will be spared the problem of the accumulation of spent nuclear fuel.

â€œThe successful implementation of this project will enable our country to become the world’s first owner of nuclear power technology that fully meets the principles of sustainable development in terms of the environment, accessibility, reliability and efficient use of resources. .

â€œToday, we reaffirm our reputation as a global leader in advancing nuclear technologies, which provides humanity with unique solutions aimed at improving people’s lives,â€ said Alexey Likhachev, CEO of Rosatom.

The design of the BREST-OD-300 lead-cooled reactor is based on the principles of so-called natural safety. The characteristics of the reactor made it possible to abandon the fusion trap, a large volume of support systems, and also to lower the safety class of non-reactor equipment.

The integral design and physics of the reactor installation make it possible to exclude accidents requiring the evacuation of the population. In the future, such installations should not only enhance the safety of nuclear energy, but also make it more economically competitive with respect to the most efficient thermal energy production (in particular, steam technology). gas).

â€œThe implementation of the ‘Breakthrough’ project encompasses not only the development of innovative reactors, but also the introduction of next-generation nuclear fuel cycle technologies.

â€œFirst, this includes the production of dense nitride MNUP fuel, which will ensure the efficient operation of a lead-cooled fast reactor and will be composed entirely of recycled nuclear materials such as plutonium and depleted uranium.

â€œSecond, it means more efficient and economically attractive radiochemical technologies for used fuel processing and waste management. Together, they will make the nuclear energy of the future in fact renewable with a virtually waste-free production line, â€said Natalia Nikipelova, President of Rosatom’s TVEL Fuel Company.

According to the planned schedule, the BREST-OD-300 reactor is expected to enter service in 2026. A fuel production facility will be built by 2023 and construction of a spent fuel reprocessing module is expected to start by 2024. – SG