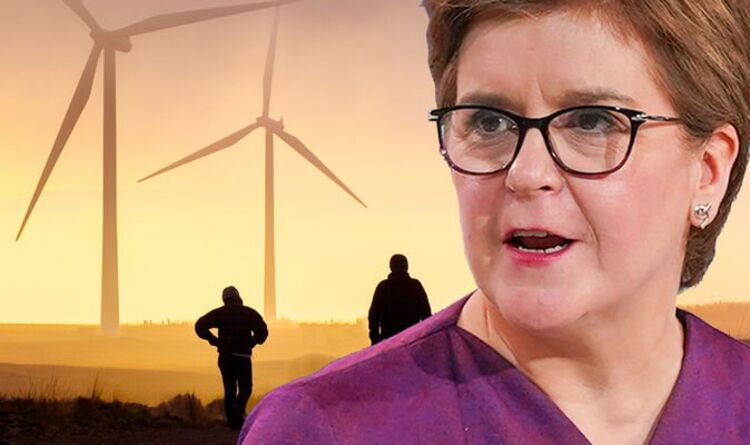 Scotland is rich in wind energy, able to generate 97.4% of its total energy needs from renewable sources. Scotland currently generates over 9,000 MW of electricity from wind farms, and this figure will only grow. Last month, a host of energy giants signed multimillion-pound contracts with Scotland to build energy farms.

Energy giants including Shell, BP and Scottish Power have agreed to collectively pay £700m for the rights to build 25 gigawatts of offshore wind power around Scotland – both floating and stationary turbines .

The deals will give Scottish First Minister Nicola Sturgeon a major boost to her bid for Scottish independence.

Renewable energy was a key element in the early battle for independence, as Scotland has one of the most favorable conditions in Europe for harvesting wind.

Speaking to Express.co.uk, Molly Scott-Cato, a green economist and former MEP, weighed in on what would happen if Scotland became independent.

She noted that the rest of the UK would not be excluded from the benefits of wind generated by Scotland, as it would likely become a major exporter of electricity, thanks to interconnecting cables to the UK, like those of Norway and France.

She said: “The energy market already does not stop at borders.

“If you look at where we get our power from right now, a lot of it already comes from the interconnections in Ireland, Norway and France.

“It also needs to increase with renewables, so there will be energy imports and exports between Scotland and England, as there is between England and Ireland and France.

“The energy market has already evolved beyond these nation-state borders.”

“Scotland will have a bigger economic impact in the years to come.

“When we get to the point of negotiating separation, and I hope it’s done in a positive spirit, that will be one of the cards Scotland will have in their hands.”

Scotland currently sits on a goldmine of exportable renewable resources.

Industry body Scottish Renewables said output had tripled in the past 10 years, with enough power for the equivalent of seven million homes.

In 2019, Scotland was reported to produce enough wind power to power the country twice.

11 MW in 5 sec: breakthrough in nuclear fusion, and why it matters