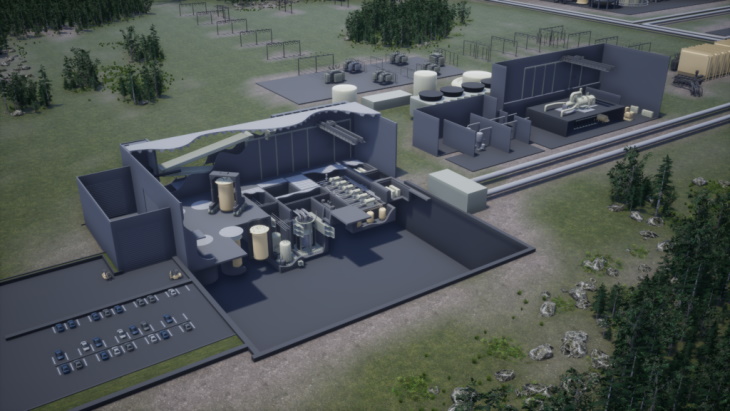 Terrestrial partners with Orano for the supply of IMSR fuel: Uranium & Fuel

Terrestrial Energy has signed an agreement with Orano for the supply of nuclear fuel for its Integral Molten Salt Reactor (IMSR). The deal is part of Terrestrial’s multiple sourcing strategy and follows last month’s announcement of a similar partnership with Westinghouse and the UK’s National Nuclear Laboratory.

A power plant based on the IMSR reactor (Image: Terrestrial Energy)

The scope of services of the agreement includes uranium enrichment, chemical conversion to IMSR fuel, its production, transportation, packaging and logistics. This scope covers the analysis of large-scale commercial production and supply of IMSR fuel and applies to major markets for IMSR power plant deployment today, including Canada, Japan, UK United and the United States.

Terrestrial said the deal is “part of its multi-sourcing strategy for IMSR fuel supply and reflects Orano’s intention to support the commercialization of next-generation reactors with its broad range of fuel services.” . He noted that the relationship between the two companies is “non-exclusive and allows the two sides to pursue other similar business opportunities in the nuclear industry.”

“This agreement with Terrestrial Energy applies the global reach of fuel supply and Orano’s experience to focus on powering the next generation of innovative and clean nuclear power in Canada,” said Amir Vexler, Chairman and CEO of Orano USA. “Our North American team is proud to play a pivotal role in making this connection and making the deal happen.”

Terrestrial Energy CEO Simon Irish added: “Utility requirements for fuel supply extend beyond uranium enrichment to a range of essential services which together provide a secure supply of fuel from the reactor to the gate of the power plant. The scope of our agreement covers the whole spectrum from enrichment, production, with its transport elements, including packaging and logistics, to a global commercial supply. This range of services is essential for the first operations of the IMSR plant from 2028.

In August, Terrestrial announced a UK partnership with Westinghouse and the National Nuclear Laboratory to advance industrial scale-up and commercial supply of enriched uranium fuel for use in the IMSR.

Molten salt reactors use fuel dissolved in a molten fluoride or chloride salt, which serves as both fuel (producing heat) and refrigerant (transporting heat and ultimately to power generation equipment) . Terrestrial’s IMSR builds on 50 years of experience at Oak Ridge National Laboratory in the United States and integrates major reactor components, including the graphite moderator, into a sealed, replaceable reactor core unit with a seven year lifespan.

The IMSR is fed with a standard dosage of low enriched uranium (LEU) – the standard for commercial fuel in operating nuclear power plants today – which is enriched up to 5% uranium-235. The IMSR is currently the only Generation IV reactor designed to use the LEU standard assay in operation.

Terrestrial Energy has engaged with regulators and industrial partners to complete IMSR engineering and plans to commission the first IMSR plants in the late 2020s. The IMSR is currently under design review provider of pre-authorization by the Canadian Nuclear Safety Commission, and Terrestrial Energy is one of three grid-wide SMR developers that Ontario Power Generation is working with as part of its goal of deploying SMR technology.

Earlier this month, Terrestrial showcased its new IMSR400 power plant, which consists of two IMSR reactors and generators to produce 390 MW of electricity at one site.

Will this Canadian REE company decide to advance its uranium projects in Athabascan?