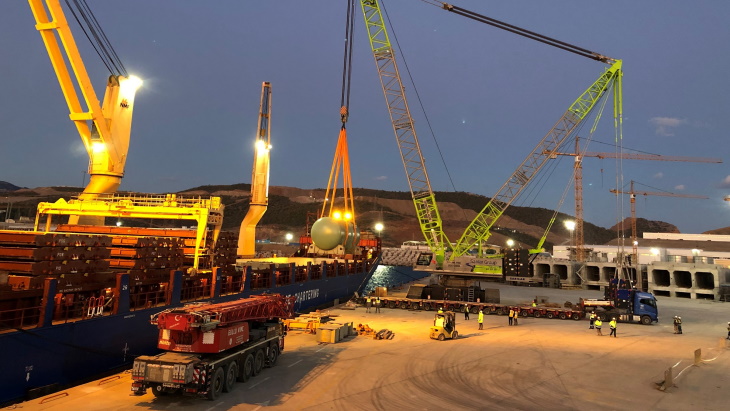 A cargo ship carrying materials and equipment for the Akkuyu nuclear power plant – including the reactor pressure vessel (RPV) for Unit 2 – has arrived from Russia at the construction site on Turkey’s southern coast. The VPN is now stored on site awaiting installation later this year.

The Akkuyu 2 reactor pressure vessel is unloaded from the cargo ship (Image: Rosatom)

The ship left St. Petersburg in northwestern Russia on November 23 and, after traveling more than 9,000 kilometers, has now arrived at the Vostochny Eastern Cargo Terminal at the Akkuyu construction site. Among its cargo were the RPV for Unit 2 as well as sections of the second level of internal containment for Unit 3, pipes and other equipment and materials.

The steel RPV – 12 meters high, 4.5 meters wide and weighing 334 tonnes – has been unloaded and placed in temporary storage, where it will undergo inspection.

Fabrication of the RPV for Akkuyu 2 started at Izhorskiye Zavody in March 2019. The RPV for Unit 1 was delivered to the site in November 2020 and installed in June last year. Production of the RPV for Unit 3 continues at the Volgodonsk branch of Atomash’s AEM-Technologies JSC, which is part of Atomenergomash, the machinery production division of Russian atomic energy company Rosatom.

Rosatom is building four VVER-1200 reactors at Akkuyu, according to a so-called BOO (build-own-operate) model. Construction of the first unit began in 2018, with start-up scheduled for 2023. The 4,800 MWe plant is expected to meet around 10% of Turkey’s electricity needs.