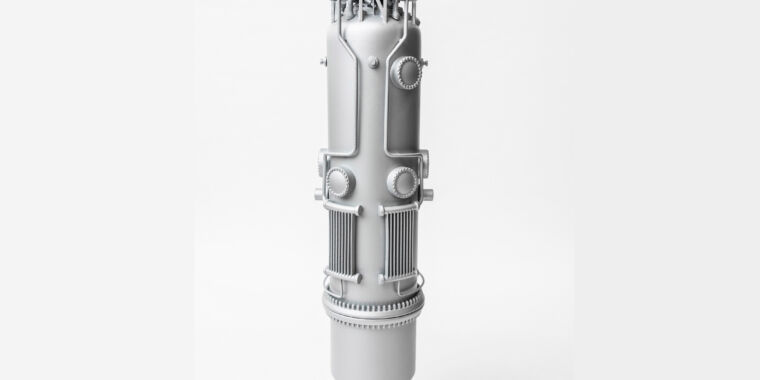 On Friday, the Nuclear Regulatory Commission (NRC) announced it would issue certification to a new nuclear reactor design, making it the seventh to be approved for use in the United States. But in some ways it’s a first: The design, from a company called NuScale, is a small modular reactor that can be built in a central facility and then moved to the site where it will be operated.

The move was expected after the design received approval during its final safety assessment in 2020.

Small modular reactors were promoted as avoiding many of the problems that made large nuclear power plants extremely expensive to build. They are small enough that they can be assembled in a factory and then shipped to the site where they will operate, eliminating many of the challenges of custom building on site. Additionally, they are structured to allow passive safety, where no operator action is required to shut down the reactor in the event of a problem.

Many of the small modular designs involve different technology from traditional reactors, such as using molten uranium salts as reactor fuel. NuScale has a much more traditional design, with fuel and control rods and energy carried in boiling water. Its unmanned safety features include placing the entire reactor in a large pool of water, control rods inserted into the reactor by gravity in the event of a power outage, and convection cooling from an external water source.

NuScale started the certification process in 2016. According to the NRC, this process required the company to submit technical information for the Commission to assess it as follows:

Applications should closely analyze the appropriate design response to accidents or natural events. Applications should also indicate the inspections, tests, analyzes and acceptance criteria that will verify the construction of key design features. In addition, the NRC also requires applicants for design certification to assess how the designs protect the reactor and spent fuel pool from the effects of a large commercial aircraft impact.

Upon completion, certification is published in the Federal Register, allowing the design to be used in the United States. Friday’s announcement indicates that the NRC is ready to take the plunge into publication.

The NRC will still have to weigh on the sites where one of these reactors is deployed. Currently, one such site is in the works: a project called the Carbon Free Power Project, which will be located at the Idaho National Lab. This should be operational in 2030, but has faced some financial uncertainty. Utilities likely to use the electricity generated there are reluctant to commit money to the project.