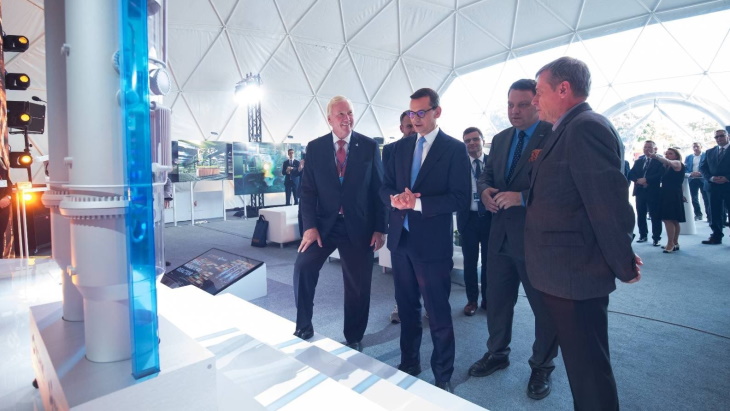 NuScale Power and Polish copper and silver producer KGHM Polska Miedź SA signed the first work order and start-up statement to begin work under the preliminary works agreement signed by the companies earlier this year . Meanwhile, NuScale has signed a contract to supply neutron monitoring equipment for use in its Small Modular Reactor (SMR).

In February, KGHM – which submitted an application to the Polish National Atomic Energy Agency (NAEA) on July 8 to evaluate NuScale’s SMR technology and prepare a site survey – signed a definitive agreement with NuScale to launch the work to deploy a first NuScale VOYGR SMR power plant in Poland from 2029.

As part of the mission order – signed on September 7 at the Economic Forum in Karpacz, Poland – NuScale will continue to support KGHM’s application to NAEA through activities such as writing analytical reports additional preliminary security checks and coordination with the NAEA. The task order also sets the stage for subsequent tasks in the EWA, as proposed by NuScale to KGHM.

“This announcement is an important next step in laying the groundwork for the launch of the project towards the first deployment of the NuScale VOYGR SMR power plant in Poland and Central Europe by enabling KGHM to become an enabler for SMRs in the region,” said declared NuScale.

“This agreement marks a significant milestone in the history of NuScale and KGHM’s partnership, establishing KGHM and Poland as leaders in the race to rapidly reduce emissions around the world,” said John Hopkins, President and CEO of the management of NuScale. “NuScale is proud to partner with KGHM, an experienced leader in innovation, and we are excited to work together to bring about the next era of advanced clean energy deployment and address the climate crisis.”

The announcement came as KGHM and Romanian utility Nuclearelectrica signed a non-binding memorandum of understanding for cooperation in the development of SMRs. The Memorandum of Understanding aims at the exchange of experiences and know-how, for a period of 36 months, in the technical, economic, legal, financial and organizational fields for the development of SMR projects to be developed by Romania and Poland.

The VOYGR nuclear power plant projects that Romania and Poland will develop, in cooperation with NuScale, will include six modules, each with an installed capacity of 77 MWe. NuScale’s SMR technology is the first to gain approval from the United States Nuclear Regulatory Commission, in August 2020. NuScale offers VOYGR power plants in 12-, four-, and six-module configurations.

Reuter-Stokes – part of Baker Hughes – and Paragon Energy Solutions have signed a contract to design and manufacture neutron monitoring detectors for NuScale Power.

The Reuter-Stokes detector arrays will be responsible for monitoring the fission rate, thereby ensuring the production of zero-emission nuclear energy. The first NuScale project to use Reuter-Stokes detectors will be the Carbon Free Power Project (CFPP) in Idaho Falls, USA, with the first NuScale VOYGR SMR power plant, which is expected to start producing electricity in 2029.

The agreement with NuScale follows a partnership agreement signed in 2021 between Reuters-Stokes and Paragon Energy Solutions which includes the development and execution of projects in the SMR and advanced reactor markets to provide a holistic solution for nuclear instruments.

“We are excited to be working with both Reuter-Stokes and Paragon as we take the next step towards delivering clean, safe energy at an accelerated scale across the globe, including for CFPP located at Idaho National. Lab,” Hopkins said.

No time for gold to move (yet)