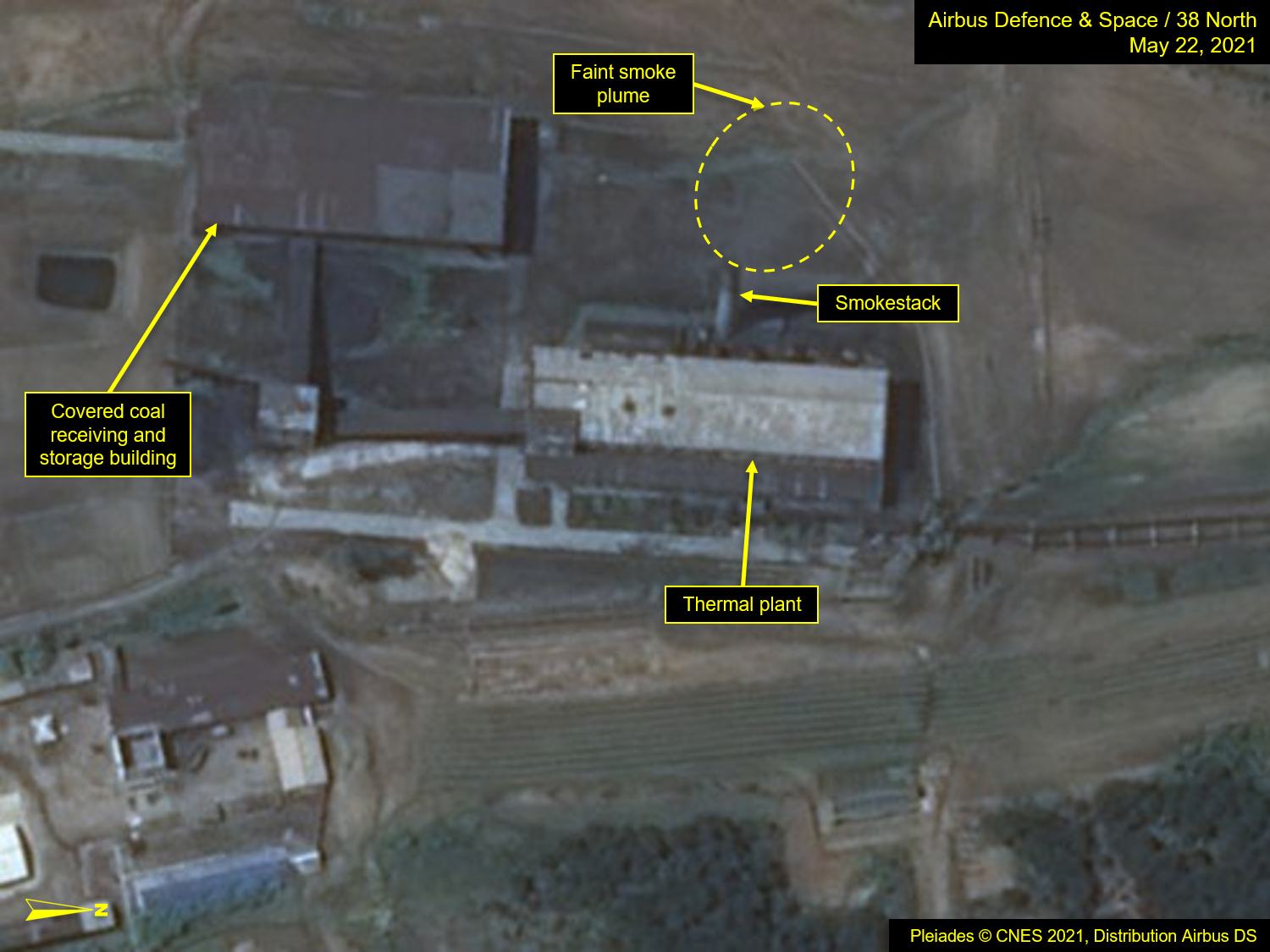 
New commercial satellite images from Yongbyon Nuclear Science Research Center in North Korea indicate: 1) continued activity at the radiochemical laboratory (RCL) and thermal plant (steam) that supports it, but no clear evidence that spent fuel rods were transferred from storage to the 5 MWe reactor to produce plutonium; 2) new activity at the experimental light water reactor (ELWR) which is probably related to maintenance / repair; 3) minor observable activity at the uranium enrichment plant (UEP); 4) continued water management efforts along the Kuryong River; and 5) continued construction of a new wing of a large laboratory building in the main administrative and research headquarters area.

The coal-fired power plant, which supplies steam to RCL, has been in continuous operation since early March, although the smoke plume is somewhat diminished in the most recent satellite images. Although steam is required to dissolve the spent fuel, extract the plutonium, recover the uranium and process the radioactive waste, there is no definitive evidence that the spent fuel was transferred from the storage facility adjacent to the. 5 MWe reactor. The production of steam, as well as the thermal infrared emanations detected, are by themselves insufficient to definitively determine whether a new reprocessing campaign is in progress or if the activity is simply linked to the treatment of radioactive waste from previous campaigns.

Images from May 22 indicate that the peak roof of the outer gantry lift tower was on the ground next to the tower structure. While the purpose of its removal cannot be certain, it was likely made to access the motorized winch, which lifts fuel containers and heavy equipment from the reactor to the port of entry on the north side of the containment building. . This allows transfers of fresh and spent fuel containers to and from the reactor building via a special airlock during refueling or maintenance operations.

Construction of the gantry tower began in 2012 and was completed in March 2013. The roof cladding was added sometime after mid-November 2015, possibly to protect the motorized winch and support rails from the elements. Since no refueling has been observed since the completion of the reactor building, the motorized winch has likely been inactive as installation and maintenance may be required to ensure operational readiness. Images of the gantry tower structure suggest that the unit has been removed from site to a nearby maintenance facility for a major overhaul.

Figure 2. Roof removed above the gantry tower at the ELWR.

Figure 3. The ELWR rendering shows the portal tower and equipment hatch with roof.

Activity at the uranium enrichment plant has been minimal. No noticeable change occurred to the cooling units next to the waterfall hall, but on two occasions a tank trailer was parked at the west end of the hall.

Another poorly understood event is the periodic arrival of three specialized cars at the UEP transfer station. On May 22, they reappeared at the city yard but had not yet reached the transfer terminal that supports the UEP. Their past transit pattern suggests they will arrive at the UEP in a few days and stay for around 10 days while a car content swap takes place. It is not known whether they deliver the product or pick up the used product. These cars appear three to four times a year and were last seen on January 19, 2021.

Steam emissions from the UO2 production process building at the former fuel rod manufacturing plant in footage from April 9 indicate that the plant remains operational.

Pipeline in the Kuryong River is continuing, as is work on the overflow dam located next to the reactor area. The dam is used to provide a constant source of water for the ELWR and the 5 MWe reactor. Earth fill is added along the entire length of the dam to repair damage from the storms of the previous year.

In the area of ​​the main research and administration headquarters, the addition of a new wing to one of the largest buildings in the laboratory is underway. The gradual addition of new buildings or the expansion of others demonstrates the DPRK’s determination to continue research and improve its capabilities at the Yongbyon complex.

Figure 6. Piping in the Kuryong River and work on the dam continues.

Figure 7. Continuation of the construction of the building at the main headquarters of research and administration.

The developer of the uranium mine told DC Circ. At the call of the Nix tribe